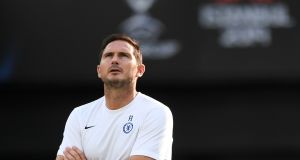 Week one as a competitive Premier League manager and Frank Lampard feels he has already experienced the rollercoaster that is life in charge of Chelsea. Not quite. It has been a week without highs so far. The first all-English Uefa Super Cup final offers the remedy and a potential platform for what lies ahead at Stamford Bridge. Liverpool sense opportunity to prolong the new Chelsea manager’s uncomfortable ride.

In Jürgen Klopp and his European champions, Lampard faces the highest calibre opponents of his short managerial career at Besiktas Park on Wednesday. Liverpool, who finished 25 points ahead of Maurizio Sarri’s side last season, are a team primed to exploit the gaps and defensive vulnerabilities that contributed to Chelsea’s 4-0 defeat in their Premier League opener at Manchester United on Sunday. The former Derby County manager insisted in Istanbul that the lessons have been learned.

“We need to be much better at not committing errors which lead to chances on the counterattack,” he admitted, “because all good teams will make it difficult if you do that.” Liverpool especially.

Klopp shares Lampard’s opinion that the scoreline at Old Trafford did not reflect the contest. He also responded with some bemusement to a Turkish journalist who ventured that Liverpool were clear favourites to beat the Europa League winners in a city synonymous with their Champions League successes.

“Chelsea are strong, young, fresh and in a really exciting moment with Frank there as a club legend trying to make his own name as a manager,” he said. “Everyone at Chelsea is on their toes. This is the first trophy they can win together. That makes it really interesting. It is a really important game for us.”

For Liverpool, their sixth appearance in a Super Cup final is a chance to breed the winning habit after lifting their first trophy under Klopp in Madrid in June and having lost on penalties to Manchester City in the Community Shield.

For Chelsea and Lampard, who lost two Super Cup finals as a player with the club, the aims are more prosaic. A performance that does not invite doubts to fester over the club’s enforced reliance on young, homegrown talent would be a welcome reaction to Old Trafford. The bonus of a European trophy in his first competitive week as Chelsea manager would, Lampard believes, have a lasting effect on a new-look team seeking to close the gap on Liverpool and City this season.

“When you work hard to get into this game between two champions it is important at a club like Chelsea that you give everything to win it. It means something to us as a club because it is another trophy and, for me, it would be a really nice start personally. But more than that it would give a really good feeling for the players with the season coming up that we can compete with Liverpool. If we win a cup that goes down in our history it gives the belief that we can go on from there. Certainly we understand the importance of it.”

It was not merely the United result that has complicated Lampard’s first week. He left N’Golo Kanté on the bench at Old Trafford due to an injury-hit pre-season. The influential midfielder came on to try to limit the damage being inflicted only to pick up an ankle problem that makes him doubtful for this match. Added to the transfer ban, the loss of an experienced defender in David Luiz, the team’s most creative talent in Eden Hazard and injuries to Willian plus Antonio Rüdiger, and the Chelsea manager is having to adapt as rapidly to changing circumstances as his players.

Klopp’s problems are minor by comparison. He will be without his first-choice goalkeeper, Alisson, until September with a calf injury, and Naby Keïta raised fresh concerns over his fitness on Tuesday when he limped out of the pre-match training session. Istanbul represents “a special place for every Liverpool supporter”, said Klopp but, 14 years on from their fifth Champions League triumph, it is the setting for the six-times winners to show their appetite for silverware is as great as ever.

The Liverpool manager said: “We won one competition last year, that’s all, so how could we change our mentality? This team is built for being successful and this final is another chance for us.” – Guardian