Economic gravity is tugging at Spurs and pieces are flaking off 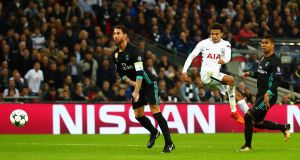 Dele Alli scoring for Spurs in the Champions League against Real Madrid at Wembley on November 1st. It was one of the most memorable nights in the history of the club. Photograph: Clive Rose/Getty Images

Gravity can be annoyingly persistent. Mauricio Pochettino said all the right things after Tottenham Hotspur’s 2-0 win against Brighton & Hove Albion on Wednesday. He is looking forward to the challenge of taking on Manchester City. He is “positive”. He promised Tottenham will “enjoy it”. They will go to the Etihad Stadium to win.

Which is all well and good. Perhaps Tottenham will end both Manchester City’s run of 15 successive league wins and their own miserable record in away games against other top-six sides. Perhaps they will, at least temporarily, return a flicker of excitement to a title race that seems all but run. However, there is a lurking sense that none of it really matters.

It doesn’t matter because City are too good, because they could lose not only on Saturday but also at Anfield, the Emirates Stadium and Wembley, and Manchester United would still have to avoid defeat against City and win their other 20 games this season to secure the title. And it doesn’t matter because Spurs are haunted by teleological dread.

Where are they hoping to get to? It is the question that underlies everything. Forget the carping about a lack of trophies; Pochettino has done an extraordinary job. He has given Tottenham a style of play. He has modified that style to function in Europe as well as the Premier League. He has promoted youth. He has done more than anybody in half a century to beat the Spursiness out of the club.

He has brought, with the victory against Real Madrid, one of the most memorable nights in the history of the club. In 30 years, when the new stadium is beginning to look a bit shabby and people are speaking nostalgically about the speciality cheese room that used to be over there, the pre-match montage will feature Dele Alli sliding Kieran Trippier’s cross past Kiko Casilla as Danny Blanchflower’s voice quavers from another age telling us the game is about glory.

But for what? All teams are engaged in a constant battle against entropy. The need for renewal, to keep staleness at bay, to maintain levels of hunger, to prevent a team growing old together, is never-ending. But no Premier League team, surely, is as conscious of their own mortality as Tottenham.

Every transfer window navigated without an exodus must be greeted with rapturous relief. The present situation simply isn’t sustainable. No matter how committed players are to the club, no matter how much they like playing for Pochettino, no matter how excited they are by the project, they cannot be expected to stay forever when they could be earning three times as much elsewhere.

In that sense, the interview Danny Rose gave in the summer was like the finger writing on the wall at Belshazzar’s feast. Daniel (Levy) surely had little difficulty interpreting it: God – or at least the modern economy of football – has numbered Tottenham’s days, they have been weighed and found wanting and their kingdom will be given to Chelsea and the Manchester clubs.

The new stadium will increase revenue. The Premier League television money means Spurs can financially outmuscle all but a handful of sides outside England. Deloitte’s most recent figures show they had the 12th highest revenue in the world – and they have probably moved up a couple of places since then.

But the most significant detail is that their revenue for 2015-16 was €279.7million. Manchester United’s was €689 million. That is a huge gulf to make up, even with the new stadium.

In the short term the stadium magnifies the financial pressures. Tottenham’s net transfer spend over the past two seasons is only £12 million.

Pochettino’s focus on youth may in part be instinctive, and he certainly wouldn’t be the first manager to find young players more biddable than their more experienced team-mates, but it is also a matter of necessity.

There has been a wobble recently, the carelessness that brought the defeats by West Ham United and Manchester United, the flatness against West Bromwich Albion, Leicester City and Watford, but three home wins in a row have restored belief. Blips happen, particularly to young sides learning to handle two contrasting approaches to games. Spurs have improved in every season under Pochettino.

At the Etihad Stadium, presumably, Spurs will look to play as they did in Madrid, sitting deep and playing relatively direct. The evidence of last Sunday was that City, majestic as they are in possession, can be unsettled by an aerial attack. City at the moment are probably more daunting opponents than Madrid – but it might work. If it does it will be further evidence of Pochettino’s excellence as a coach, and will help Tottenham qualify for next season’s Champions League, which is not insignificant in terms of revenue.

But beyond that? That’s the problem. How much longer does this Tottenham have? Already pieces are flaking off. They had a window to win the league that perhaps has one year left to run. They have not done much wrong but have come up against a Leicester and a Chelsea playing beyond themselves and now a City who threaten to be the greatest side the Premier League has known. It is a lovely idea that camaraderie will keep them together, but it is not realistic. Economic gravity is tugging at Tottenham’s heels.

The game is about glory? Perhaps. But these days it is mainly about money.