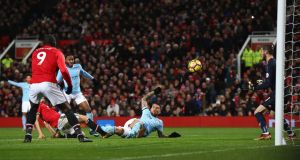 For Manchester City, this was not just the day they declared themselves the best team in town. It counts for more than that, surely, when there is now an 11-point gap at the top of the Premier League and the team in second place have just learned the hard way why Pep Guardiola’s side are disappearing into the distance.

The team in blue left the impression they were in a hurry to finish this season’s title race and though it still feels ridiculously early, with snow on the pavements and advent calendars two-thirds unopened, who can possibly see a way back now for Manchester United or anybody else from the chasing pack? Far more likely, the gap will just keep growing and Jose Mourinho might have to realign his sights to the cup competitions. It feels like we are watching one of the most exhilarating one-horse races there has ever been in England’s top division and, as far as the championship goes, that surely is that.

Anything else would be extraordinary after City’s 14th successive league win and a game was that was so one-sided at times the number-crunchers could produce first-half statistics to show Mourinho’s men had had 22% of the ball. The more important detail came in the form of the goals from David Silva and Nicolás Otamendi that won this derby, with Marcus Rashford scoring on the break for United in between, but when was the last time, on their own ground, United had so little possession?

The irony is they might still have rescued themselves in that remarkable moment, with five minutes of normal time to go, when Romelu Lukaku smashed a close-range shot into Ederson’s face and the substitute Juan Mata also aimed straight at the goalkeeper with the follow-up effort. Yet the days have passed since Sir Alex Ferguson liked to boast no other team on the planet scored more late goals. In fact, a lot has changed at Old Trafford judging by the story of this game and the difference in approach between the two sides.

The crowd here still like to sing about “football taught by Matt Busby” but, as City’s players worked their elaborate passing patterns, there was a different soundtrack to this match. The first chants of “park the bus, Man United” could be heard from the away end before the 15-minute mark. The next song, expletive removed, queried whether the team in red might be “scared”. Soon afterwards, there were “olés” from the away end. OK, possession statistics don’t mean bonus points but, for a club with United’s ambitions, it must have been startling for the home crowd to see how one team took care of the ball, and the other did not. By half-time, City had played more than four time the number of passes, 334 to 78, than the home side.

Guardiola finished the match with Silva operating as a centre-forward. He lost his captain, Vincent Kompany, at half-time and had a spell with Fernandinho experimenting as a centre-half. Sergio Agüero, one of the best strikers of the Premier League era, was not required for a single minute. And yet City still found a way to outplay, out-pass and outscore their opponents.

The only possible criticism, if we were nitpicking, was that Gabriel Jesus gave Mourinho the opportunity afterwards to refer back to his pre-match assertion that City’s players (not that his ever would, of course) dive. Jesus, chosen ahead of Agüero, should also have been booked for one of those tactical fouls that Mourinho had also flagged up. Yet City, for the most part, did not need to resort to underhand tactics to signal their superiority and must have felt aggrieved, to say the least, that they were only drawing at half-time.

Unfortunately for Fabian Delph, it was a poor misjudgement on his part that allowed Rashford his first sight of goal and, in the process, served as a reminder that City’s current left-back is actually a central midfielder by trade, filling a new position because of Benjamin Mendy’s absence with a knee injury. Delph seemed caught out when Otamendi was unable to meet Marcos Rojo’s cross. Rashford was on the loose ball in a flash and fired a diagonal shot past Ederson.

Two minutes into first-half stoppage-time, that goal soothed the nerves of the crowd and set up a second half where United did at least seem to remember they were supposed to be the home side. City had an experimental backline, always slightly vulnerable to crosses from wide areas, but the same could also be said of the home team and the problem, perhaps, when so many attackers are required to help out in defence is that mistakes invariably occur.

It certainly seemed that way in the 54th minute when Silva clipped a free-kick into the penalty area and Lukaku swung out his boot to hook the ball back upfield. The attempted clearance ricocheted off his team-mate Chris Smalling and the ball fell invitingly for Otamendi to volley the ball past David de Gea from inside the six-yard area.

For all of City’s pass-them-to-death football, it was a scruffy, slightly fortuitous way to score and the same applied when Silva opened the scoring from another set-piece, again involving an unwitting contribution from Lukaku. Kevin De Bruyne swung over a corner from the right and the ball thudded off Lukaku, under pressure from Otamendi, before dropping to Silva. Perhaps there was a case that Lukaku had been impeded. Silva did not wait to find out, hooking in a bouncing ball, and ultimately it would not have flattered City if they had taken any of their late chances.