‘The manager has made me feel welcome, he’s shown a lot of faith in me and played me’ 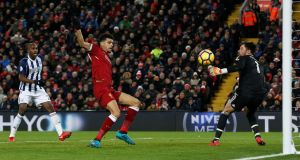 Dominic Solanke has claimed he was “very unlucky” not to register his first Liverpool goal against West Bromwich Albion despite admitting the disallowed effort did strike his arm.

The young Liverpool striker had his 82nd-minute celebrations cut short against Alan Pardew’s team when the referee Paul Tierney and assistant Constantine Hatzidakis penalised a handball offence. Jürgen Klopp, the Liverpool manager, said he was unsure Solanke had used both his chest and arm to convert Joe Gomez’s cross after watching several replays.

“It was another moment where we had no luck,” said Klopp, who maintains Everton were wrongly awarded a late penalty in the Merseyside derby on Sunday.

Solanke, however, confirmed: “It went on to my chest, I tried to chest it in and it has clipped my arm. The referee disallowed it but it’s very unlucky. I thought he had given it. I was celebrating. I don’t know what changed his mind but he did. I thought I’d won it. It’s not nice when you are celebrating and it gets disallowed.”

Despite the frustration of another home draw and the wait for his first Liverpool goal, Solanke insists he has been encouraged by his contribution and the feedback from Klopp since arriving from Chelsea in the summer. The 20-year-old was handed his first Premier League start at Anfield in the Merseyside derby and has made 14 appearances for Klopp’s side so far, vindicating his decision to leave Stamford Bridge in search of more regular first-team football.

Solanke said: “The manager has made me feel welcome, he has showed a lot of faith in me and played me in some important games. He always gives me feedback and tells me if I think I should be doing something better which you want from a manager. He does it game by game. If I’m playing and he sees things I can do better or I’m doing well he will always tell me. It is criticism and praise, it helps me a lot.

“I’m happy here. It’s a great club, a great team and we’ve been doing well. We have to keep on trying to win games. At Liverpool there are a lot of young players, it’s a young squad and the manager has a lot of faith in the young players so it’s a good place to be.”