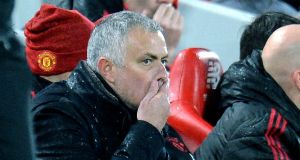 Manchester United manager Jose Mourinho will unlikely be pleased with his side being paired against PSG in the last 16 of the Champions League. Photograph: EPA

Try as he might, Txiki Begiristain found it hard to hide his delight. Although City’s director of football said all the right things about Schalke representing a difficult hurdle to his side’s prospects of progressing to the last eight in the competition they covet most, a meeting with the team who are currently 13th in the Bundesliga is unlikely to raise much concern in the corridors of power at the Etihad Stadium. Dominico Tedesco’s side finished five points behind Porto in a weak group and have lost eight times in the league this season, although Pep Guardiola will not underestimate their threat even if he did not lose to them in six meetings as Bayern Munich manager. The former Tottenham midfielder Nabil Bentaleb and Switzerland striker Breel Embolo are potential danger men as Leroy Sané returns to his former club for the first time since joining City in 2016.

Juventus finished ahead of Manchester United in their group but will be wary of facing Diego Simeone’s side as Cristiano Ronaldo makes his first return to Madrid since leaving their bitter rivals in the summer. Atlético’s Wanda Metropolitano will host the final on June 1st, perhaps making them an even tougher nut to crack than usual in a competition in which they have finished as runners-up three times. In nine home matches this season, Atlético have conceded only five goals but showed a new vulnerability on the road in the 4-0 thrashing by Borussia Dortmund during the group stage that denied them top spot. Juventus remain one of the favourites and with Ronaldo in their ranks should have just enough firepower to find a way through Simeone’s miserly defence, led by Jan Oblak and Diego Godín.

Less than 24 hours after a costly defeat at Anfield, this was the draw José Mourinho was probably expecting. Thomas Tuchel’s PSG racked up 17 goals during the group stages after a slow start and are already approaching half a century in Ligue 1 having played 16 matches, meaning Manchester United’s manager will need to call on his vast Champions League experience to get through this tie against Neymar, Kylian Mbappé and co. November’s dramatic victory against Juventus in Turin could give him a glimmer of hope of emulating David Moyes in 2013 by reaching the last eight while struggling in the Premier League, although you have to fear for United’s defence given recent displays. The question is whether Mourinho will still be in charge for the first leg at Old Trafford on February 12th.

Mauricio Pochettino’s side beat Dortmund twice in the group stages in 2017 but Lucien Favre’s side are a different prospect these days. Nine points clear in the Bundesliga and yet to taste defeat in 15 matches, they will be formidable opponents as they attempt to put last season’s disappointing defeat by Juventus at this stage behind them. The England forward Jadon Sancho has emerged as a major star of Dortmund’s vibrant young team, with the 18-year-old having contributed five goals and seven assists this campaign in the league. The German side are led by a resurgent Marco Reus, have the super-sub Paco Alcácer and boast a defence which has conceded only 15 goals in the league. Spurs will need to show more of the fighting spirit they summoned in squeezing through their group if they are to reach the quarter-finals for the first time since 2011.

The French side have reached this stage for the first time since 2012 and showed they are not here to make up the numbers by defeating Manchester City away in the group stages before the 2-2 draw last month. The captain Nabil Fekir has excelled after his transfer to Liverpool collapsed, although they are 13 points behind a rampant PSG in Ligue 1 and have proved inconsistent. Barcelona are still smarting from their quarter-final embarrassment at the hands of Roma last season and Ernesto Valverde’s side will be expected to progress without too much fuss. Two goals from Thierry Henry in a 5-2 thrashing at the Camp Nou at this stage set Pep Guardiola’s side on course for their third title in 2009 and they will fancy their chances of going all the way again this year.

Last year’s semi-finalists finished behind Real Madrid in the group stages, with Roma’s young side struggling down in sixth place in Serie A. Eusebio Di Francesco has been under pressure in recent weeks but will hope that he can survive the winter months to lead his side into what looks a great opportunity to reach the last eight. Porto dropped only two points on their way to topping an admittedly weak Group D and have a narrow lead in the Portuguese league under manager Sérgio Conceição, perhaps making them slight favourites to progress in a competition they have won on two previous occasions. But Roma’s experience at this level could tip the balance in their favour if they can resolve their domestic issues.

A repeat of the semi-final in 1973 that saw Johan Cruyff’s side win 3-1 on aggregate on their way to the second of three European Cups in succession, the next meeting of these two famous clubs will be a mouthwatering prospect that pits Erik ten Hag’s exciting young side against the reigning champions. Real Madrid have not lost a knockout tie in the Champions League since their defeat by Juventus at the semi-final stage in 2015 but have struggled in the wake of Zinedine Zidane’s departure in the summer and were embarrassed at home by CSKA Moscow in midweek. They remain favourites but the energy and pace of Ajax’s midfield and attack led by the new generation of homegrown talent will provide a stiff test for the 13-time winners.

A meeting with the perennial German champions may not be the daunting prospect it used to be but Bayern will nonetheless provide a tough obstacle to Liverpool’s hopes of progressing. Ajax were the latest opponents to expose their defensive frailties under manager Niko Kovac in the thrilling 3-3 draw last week, with several of their established stars struggling to find the consistency they have become known for over the years. Jürgen Klopp won only nine of his 29 matches against Bayern as manager of Mainz and Borussia Dortmund and will be keen to make up for the latter’s defeat in the 2013 final. He will be without the suspended Virgil van Dijk for the first leg at Anfield on 19 February yet should be confident that the Premier League leaders can repeat their victory on away goals in the 1981 semi-final.