Ireland looking for confident start against Montenegro in Tallaght

Opening opponents lost 10-0 to Germany at the weekend 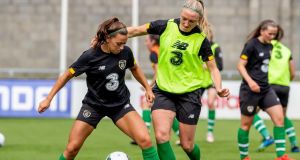 Katie McCabe and Louise Quinn in action during a Republic of Ireland training session at Tallaght Stadium ahead of Tuesday night’s European Championship qualifier against Montenegro. Photograph: Morgan Treacy/Inpho

Tom O’Connor has a full squad to choose from ahead of Tuesday’s opening game of the Irish women’s European Championship qualifying campaign. Katie McCabe and co are anxious to kick things off with a win but will be confident as they head into a game against a Montenegro side that was beaten 10-0 by Germany over the weekend.

Despite that result, McCabe, who will captain the side again, insists nobody in the Irish camp is complacent ahead of the match, with the 23-year-old suggesting that the visitors have both “strengths and weaknesses” which the Irish players will continue to weigh up in advance of the kick-off.

“We’ve looked at the game from Saturday and nobody is taking anything for granted,” said the Arsenal player. “We’re really happy with the preparation and we can’t wait for this campaign to just get started now. We want to qualify and to do that [automatically] we need to top the group so that is what we will be trying to do.”

For O’Connor, the game may provide another opportunity to make his case to land the job on a longer term basis. The Dubliner took charge for the recent friendly in the US where the expectation was that a permanent appointment would have been made by now. The association has since been rebuffed by a number of high-profile coaches it sought to recruit and O’Connor, who has been interviewed for the position, remains hopeful despite the general expectation that an outsider will still eventually be hired.

“Look, I’ve loved every minute of it,” he says. “As a young player you want to play at the highest level. As a young manager it is the same and I’m currently the custodian of a senior international team so I’m delighted. Whatever happens, I’ll be on board in some shape or form.”

Montengro, he acknowledges, will present a very different challenge to what was, at times, a rearguard action against the Americans but O’Connor is happy that the squad is in a good place.

“People talking about Germany [being top seeds in the group] but I’d be happy if we were playing the Germans next week,” he says. “If we are set up properly, this team can play anyone, we showed that in the second half against the USA [which Ireland started 3-0 down but in which they prevented their hosts from adding to the margin] when I thought we were unbelievable.

“Obviously, Montenegro will set up differently, they’ll probably play a 4-5-1 so we will have to find a way of breaking them down and we will have to have our shooting boots on.”

Admission to the game is just €5 for adults and McCabe says she is hoping that some of the positive publicity the women’s game has had over the summer has an effect.

“I’m hoping for a Shamrock Rovers v Bohemians turnout,” she jokes after the Dublin derby attracted just over 7,000 at the weekend. “I’m hoping that off the back of the World Cup and the fact that RTÉ covered it, it’s been shown that women’s football is something to come and watch.”

1 Maradona’s terrible, terminal journey from human to myth divided him in two
2 Here is your handy guide to sport on television this week
3 Rapid Vienna take the gifts on offer as Dundalk mess up their lines again
4 Feidhlim Kelly: Athletics competition needs a roadmap to recovery and fast
5 Andy Farrell hands Billy Burns first Ireland start against Georgia
Real news has value SUBSCRIBE
Crossword Get access to over 6,000 interactive crosswords