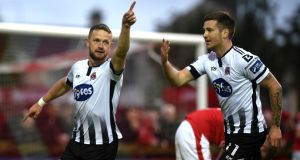 Dane Massey and Andy Boyle got their first goals of the season as leaders Dundalk reopened a seven-point lead at the top of the Premier Division at the Showgrounds on Monday night.

Massey’s opener against a blunt Sligo Rovers side arrived in splendid style just 15 minutes in as he delightfully finished with an acrobatic volley inside the area when the ball rebounded nicely into his path.

Michael Duffy and Patrick McEleney were involved as they linked up down the left, before Duffy’s cross was only cleared as far as Massey’s ruthless finish.

Jamie McGrath had a couple of efforts off-target, and Pat Hoban also shot wide from a decent position, but there was no doubting the league leaders superiority as the home side struggled without the services of striker Ronan Coughlan, who was a late withdrawal.

Dundalk doubled their advantage on 53 minutes as Duffy’s corner from the right was powerfully met by Boyle inside the area.

Another Duffy corner almost produced a third goal with 10 minutes remaining as Hoban headed off the crossbar.

It was the second time the visitors had struck the woodwork on the night with McEleney’s effort from inside the area also crashing off the bar.

Cork City were left shell-shocked as Waterford took the points at Turner’s Cross thanks to two late goals.

Having been on the back foot for most of the second half as the home side tried and failed to double their half-time lead, Waterford never wilted and were rewarded as Maxim Kouogun, a first-half sub, headed home a cross from Shane Duggan to level on 82 minutes.

While there was still time for Cork City to try to find a winner, they left space as they did so and their punishment was compounded in injury time as sub Michael O’Connor fed Georgie Poynton in the area, the midfielder unselfishly squaring to Walter Figueira for the winner.

The hosts will wonder how they are still without a home league win since May 10th and new boss Neale Fenn remains without a point. Having got on top in the first half, with Eoghan Stokes impressive, they hit the front in the 25th minute as Dáire O’Connor curled home a lovely effort following a short corner.

High on confidence, City continued to threaten before half-time, though in injury time a long-range Duggan shot needed a good save from Tadhg Ryan, making his first start in the City goal.

The Rebel Army pushed on again early in the second half, with Mark O’Sullivan twice denied by Matt Connor while the Waterford goalkeeper also saved from Stokes.

A one-goal lead was always dangerous and Waterford made the most of their let-offs as they struck on the double in the closing stages.