Point should be enough to keep Seagulls in the Premier League 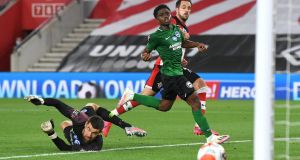 Danny Ings an equaliser for Southampton during the Premier League game against Brighton at St Mary’s. Photograph: Neil Hall/EPA/NMC

Danny Ings struck his 20th league goal of the season to earn Southampton a point and keep his chances of winning the Golden Boot alive, becoming the first player to reach that landmark in the Premier League for the club since James Beattie in 2003.

Ings cancelled out Neal Maupay’s first-half strike midway through the second half and both sides could have snatched victory through unlikely sources, Yves Bissouma blasting painfully wide after Mat Ryan made a fingertip save to prevent Jannik Vestergaard’s piledriver from finding the top corner. A point does not guarantee Brighton’s safety but their superior goal difference means this draw all but rubber-stamps their top-flight status for another season.

Both teams made changes, with Ralph Hasenhüttl particularly keen to freshen things up given Southampton’s tight turnaround from Monday’s draw at Manchester United. But whereas Brighton appeared reinvigorated after making six changes from their shellacking against Manchester City, Southampton’s introduction of five new faces led to a disjointed and muddled first-half display, something Maupay seized upon. Glenn Murray cutely flicked on Tariq Lamptey’s long throw and Maupay punished some slack Southampton defending, darting between Vestergaard and Jan Bednarek to fire home beyond the goalkeeper Alex McCarthy.

It was a sharp finish, his 10th goal of the season, a landmark that puts him in good company, becoming the sixth French player to reach that tally in their maiden season in the Premier League, following in the footsteps of Eric Cantona, Thierry Henry, Olivier Giroud, Anthony Martial and Alexandre Lacazette.

Pierre-Emile Højbjerg returned for Southampton at right back but spent the majority of the first half on the receiving end of Hasenhüttl’s wrath. The 20-year-old Jake Vokins made his Premier League debut at left back while another academy graduate, Ireland youth international Will Smallbone, was given another chance to impress in midfield.

Brighton lost their two previous matches, conceding eight goals along the way, but were organised from the off here, acutely aware of the value of victory and rarely troubled – aside from when Ings had the ball in the net via the woodwork before the striker was ruled offside.

By half-time Hasenhüttl had seen enough, reverting Højbjerg to midfield after introducing Kyle Walker-Peters, while Ché Adams replaced Irish striker Michael Obafemi. Brighton got too comfortable and retreated deeper, inviting a swell of pressure and eventually that strain told when Ings levelled with his typically clinical finish.

Earlier Vokins flashed wide from distance – Hasenhüttl, for one, thought it was in – before Lewis Dunk made a miraculous goal-saving block to prevent Adams smashing in the rebound from Ings’ curled shot. But then Ings bared his teeth. – Guardian

1 Level 5 golf shutdown: Ireland one of few countries to close courses
2 Shock at golf clubs as sport faces shutdown in Level 5
3 Dan Martin toasting another stage win at the Vuelta
4 Philip Reid: Hard to find the sense in closing golf clubs
5 Ken Early: Like Napoleon, Mourinho is the outsider always trying to prove himself
Real news has value SUBSCRIBE