Coleman return and Walcott arrival boost Everton on the double 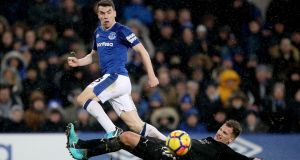 Leicester City stood firm in the face of Manchester City’s late pursuit of Riyad Mahrez but this was a deadline day to forget for Claude Puel and his team. Theo Walcott struck the first goals of his Everton career to condemn the visitors to a deserved defeat under the blue moon at Goodison Park.

Everton’s recent purchase from Arsenal was the dominant performer as Sam Allardyce’s team ended a run of seven games without a win. It was a comfortable triumph too until Wayne Rooney was adjudged to have pulled Wilfred Ndidi in the box and Jamie Vardy converted the resulting penalty. Leicester finished with hope but whether distracted by the leaders’ interest in their star player, or simply out-manoeuvred by Everton, Puel’s team were second best.

Mahrez was a notable absentee but there was also a welcome return at Goodison. Séamus Coleman was back in the Everton line-up for the first time since having his leg broken playing for the Republic of Ireland against Wales 10 months ago.

The Ireland captain received a rousing reception, his image adorning a large banner draped over the Park End before kick-off, and his match fitness was tested quickly as Leicester made the brighter start. Coleman responded well, and his trademark runs down the right were rapturously received by the home crowd.

Leicester could have established a comfortable early lead with two headers that stemmed from Marc Albrighton corners on the left. The first was powered over from close range by Harry Maguire, whose reaction showed he should have hit the target, and the second from Wilfred Ndidi sailed over Everton goalkeeper Jordan Pickford only to smack the crossbar. Everton certainly made the most of the reprieve.

The home side were slow, ponderous and over-reliant on the long ball initially. There was no improvement on the previous outing against West Brom even with another much-changed team by an Everton manager. Allardyce had said after the Albion draw that Rooney and Gylfi Sigurdsson were too similar to play in the same team but here they were, playing in the same team and eventually doing so to good effect as Everton gradually improved.

More urgency and aggression helped rouse both Everton’s crowd and team and both were to the fore as Walcott swept them ahead with the first goal of his Goodison career. Cuco Martina instigated the breakthrough by dispossessing Ben Chilwell just outside the Leicester penalty area. The ball broke for Sigurdsson who picked out Walcott arriving unmarked at the back post and the recent £20 million signing from Arsenal converted with ease past Kasper Schmeichel.

Oumar Niasse, favoured in attack to new £27 million signing Cenk Tosun, should have doubled Everton’s lead when another low Sigurdsson cross from the right was diverted into his path by Daniel Amartey. With time and all of Schmeichel’s goal to aim for, however, the Senegal striker dragged his shot horribly wide. Goodison was a mass of people with hands on heads at the miss, but moments later it was forgotten as the hosts did find the target again.

Sigurdsson and Rooney combined in midfield for the latter to send a deep cross to the back post where Michael Keane and Amartey duelled for the header. The ball appeared to spin off the Leicester defender’s head and fell perfectly for Walcott, standing unmarked on the other side of the area, to volley home his second of the game under the exposed Schmeichel. Niasse then squandered another clear opening when he burst through on goal only to over-run the ball into the goalkeeper’s grateful arms.

Walcott’s energy and confidence rubbed off on his team-mates and Everton looked increasingly comfortable in possession in the second half. The winger’s willingness to press also endeared him to his new fans, particularly when he forced Schmeichel to slice one clearance out of play, and Everton were comfortable until Vardy’s penalty. Kelechi Iheanacho struck the bar and post within seconds of his introduction but Allardyce’s side held out, just. – Guardian service