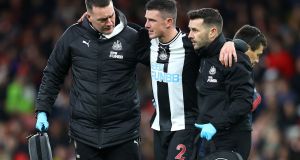 Newcastle defender Ciaran Clark will not play again this season after the full extent of his ankle injury was confirmed.

The 30-year-old, who will miss the Republic of Ireland’s Euro 2020 play-off against Slovakia next month as a result, was given the bad news after seeing a specialist about the damage he sustained at Arsenal on February 16th.

He left the Emirates Stadium on crutches and had been wearing a protective boot, but his hopes of returning before the end of the season have now been dashed.

Newcastle are yet to comment, but it is understood the former Aston Villa centre-back suffered ligament damage which will rule him out for the remainder of the campaign.

Clark had be in fine form for Newcastle and returned to action for his country as a half-time substitute in the 1-1 qualifier draw with Denmark in November.

He is the third Magpies defender to be struck by a long-term injury this term with Paul Dummett currently sidelined by a hamstring problem and loan signing Jetro Willems recovering from a ruptured cruciate ligament.

However, he still has Jamaal Lascelles, Federico Fernandez, Fabian Schar and Florian Lejeune at his disposal, while Danny Rose arrived on loan from Tottenham last month.

The Magpies currently lie in 14th place, seven points clear of the relegation zone, but with work still to do after collecting just two points from the last 12 on offer.

Carusa to join up with Ireland

In a boost to the Ireland women’s Euro 2021 hopes – for which qualification begins next week – American-born striker Kyra Carusa has received international clearance to join the squad.

Vera Pauw’s side meet Greece in Tallaght next Thursday before travelling to Montenegro and Carusa will join up with the squad this weekend.

The 24-year-old qualifiers for Ireland through grandparents on her mother’s side and is currently playing with Danish side HB Koge.