Raheem Sterling finds his perfect pitch on a night for directness

On a surface scarred by the NFL, Manchester City’s wide receiver was always a threat 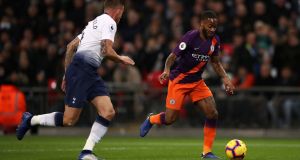 It is hard to think of many stranger Premier League fixtures than this, though this 1-0 victory for the champions was strange in an understated, slightly dreamy kind of way. For most of the first half it was almost impossible to look past the wretched spectacle of the Wembley pitch, heavily scarred by the markings of the NFL game on Sunday night and appearing here like a jilted bride in its faded Super Bowl suit, still mourning that scuppered elopement with the man from the Jacksonville Jaguars.

The ground staff at Wembley should be applauded for their hard work in remedying this. To their credit the pitch played well. But it looked terrible. The Wembley centre circle was still home to a mockingly semi-erased NFL badge. The yard-markers from 50 to 10 were confusingly visible. On the near side a brown trench ran the length of the pitch with the word LONDON emblazoned in green relief, like the logo on the hem of a cheap pair of pants. Otherwise the surface looked drawn and haggard, a pitch still coming down from the night before the night before, with lines and cracks and stubbly patches peeking through.

Perhaps unsurprisingly City and Spurs produced an odd, half-and-half performance. City never really looked like losing, even as they were cut open regularly on the left, Bernard Mendy scampering up and down his flank like a startled kitten.

City were also sublime in attack at times, the short-range combinations between David Silva, Riyad Mahrez and Bernardo Silva so soft and sinuous they should probably have been pixelated out in the name of decency or subject to a tactful cut away by the TV director.

In the middle of all this it was Sterling who provided a note of hard-running certainty. It is still easy to underestimate what City’s most prosaic, no-frills attacker offers to this team of artists. It was Sterling’s direct running in the sixth minute that made the only goal, initiated by Ederson’s hard, flat forward pass.

With the ball at his feet City’s keeper saw Sterling split left from the snap and sent the ball long. Kieran Trippier could only flick it on back towards his own goal. Sterling carried the play into his own favourite little hot spot by the intersection of six-yard box and touchline, then cut back for Riyad Mahrez, arriving late in the end zone, to ease the ball into an unguarded net.

It was a wonderfully simple, well-executed goal. But then Sterling is a hugely effective Premier League player now, reward for his own hard work with Pep Guardiola and for a clarity in his attacking intentions. He has become a pared back inside forward, operating in the same channels, with the same range of movements and with a brutal repetitiveness. It works. The assist for the goal was Sterling’s third of the season to go with four goals in eight league games.

It was also a welcome element of certainty on a night when both teams looked spooked at times. The Mendy-Sissoko channel in particular was home to some slapstick moments. Look, there goes Mendy again, caught 40 yards upfield, haring back frantically like a man fleeing a pack of wild dogs. But wait, here’s Sissoko to punt the ball blindly out of play, each time looking utterly stunned, as though only then rediscovering that, yes, he really is still Moussa Sissoko.

It was further forward on City’s flanks that the best football of the game was played. Mahrez always seemed to be free, jinking always to his left, a jink so well advertised one half expected it to pop up on the scrolling boards at the side of the pitch in shiny flashing text, but which somehow nobody ever really seems to expect.

With Sterling on the other side City always carried a threat, even on a night that will be remembered more for the oddity of its staging. At the end there was a reassuringly warm quality to the cheers from the City fans, and an unusual energy to the backslaps among Guardiola’s staff. City have now travelled to Arsenal, Liverpool and Spurs, keeping three clean sheets and taking seven points. They were lucky not to concede, rescued by Ederson in the first half, and by Erik Lamela’s ham-footed finish in the second. But this was just a game to win, a strange night on a weird pitch, decided by a moment of prosaic incision from City’s own local boy.

1 Diego Maradona dies of heart attack, aged 60
2 Keith Duggan: Through the glories and the disgraces, we were all Maradona addicts
3 Andy Farrell to delve deeper into Irish squad for team to play Georgia
4 Darragh Ó Sé: Cork and Donegal went out with the wrong attitude
5 Handful of God: Five magic Maradona moments
Real news has value SUBSCRIBE