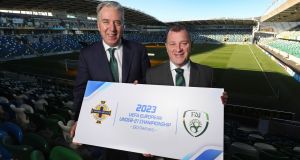 The FAI’s John Delaney and IFA’s Patrick Nelson announce a joint bid to host the 2023 Under-21 Euros. Photograph: William Cherry/Inpho/Presseye

The FAI and Irish Football Association have confirmed a joint bid to host the 2023 European Under-21 Championships. The event would be staged at venues on both sides of the border with the Aviva Stadium and Windsor Park mentioned in the potential line-up of stadiums to be used.

The fact that the two associations have opted for 2023 rather than the 2021 edition of the competition means that a revamped Dalymount Park may be available. An agreement has also been reached with the IRFU with regard to Thomond Park and Ravenhill in Belfast if they are required, but a final roster of grounds has yet to be finalised as the process will now play out over the coming 18 months or so.

“This is an historic announcement as it sees both the FAI and the IFA working together on a project which will bring significant benefits to Ireland - north and south,” said FAI chief executive John Delaney in advance of today’s bid launch in Belfast. “There is no doubt that there will be competition from across the continent to host such a prestigious tournament, but we believe that the unique nature of our bid makes it a compelling vision for both Uefa and the wider European football family.”

His IFA counterpart, Patrick Nelson, acknowledged that the IFA could not have envisaged bidding for a tournament of this scale by itself and suggested both associations would benefit if the event goes ahead here.

“We couldn’t host a tournament of this scale on our own, so I’m pleased that both associations are working in partnership on this bid. I believe that together we can showcase the best of the game in Northern Ireland and the Republic of Ireland to the football world and I have no doubt that, if successful, 2023 would help grow the game at all levels.”

Assuming the rules for the 2023 event are the same as for 2021, both nations would participate in the finals if the bid is successful, with just one play-off place being left to compete for between the best of the nine second placed sides in the group stages of qualification.

The decision on where the tournament is held, which is expected to be made in early 2020, will be made by Uefa’s Executive Committee.