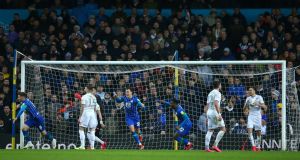 West Brom took advantage of another slip-up from Leeds to return to the top of the Championship.

Wigan won at Elland Road for the second time in as many seasons after Joe Williams’s corner was deflected in off Pablo Hernandez, securing the visitors a 1-0 victory and moving them to within two points of safety.

West Brom, meanwhile, moved one point clear of United at the summit by ending a seven-match winless streak in the league with a 2-0 triumph over bottom-placed Luton.

Donervon Daniels turned new loan signing Callum Robinson’s cross into his own net after 14 minutes and Semi Ajayi added a second to condemn the Hatters to a 12th consecutive away defeat.

Fulham are now three points behind Leeds after holding off a strong Huddersfield fightback to win 3-2 at Craven Cottage.

The hosts had a 3-0 lead inside 32 minutes following goals from Bobby Reid, Tom Cairney and fit-again Aleksandar Mitrovic, the latter’s 19th of the season.

Emile Smith Rowe and Steve Mounie reduced the deficit before half-time but it was not enough for Town.

Tiago Silva gave Forest the lead before Lewis Grabban saw his penalty saved by Lee Camp in the 41st minute.

Forest were punished when Irish loan signing Scott Hogan levelled a minute later on his debut for the Blues and Kristian Pedersen netted the winner 16 minutes from time.

Said Benrahma scored a hat-trick to inspire fifth-placed Brentford’s 5-1 hammering of Hull at the Kcom Stadium.

Having sold forward Jarrod Bowen and winger Kamil Grosicki to West Ham and West Brom respectively on deadline day, the Tigers were 2-0 down inside 20 minutes following Benrahma’s strike and a Reece Burke own goal.

Goalkeeper David Raya gifted the Tigers a way back into the match on the half hour, letting a long ball from Ryan Tafazolli go under his foot and in, but Ollie Watkins netted his 19th goal of the season and Benrahma completed his treble to leave Brentford five points off second.

Famara Diedhiou’s 10th goal of the campaign gave Bristol City a 1-0 win at QPR, keeping them sixth after a fourth consecutive league win, while Sheffield Wednesday drew 0-0 with Millwall at Hillsborough.

Preston and Swansea remain just outside the playoff spots after drawing 1-1 at Deepdale.

Charlton moved four points clear of the relegation zone after beating Barnsley 2-1 at the Valley.

Lyle Taylor and Andre Green were on target in the first half to leave the visitors, who grabbed a lifeline through Cauley Woodrow 19 minutes from time, seven points from safety.

Blackburn lost ground on the top six following a 1-1 draw at Middlesbrough.

Rovers went ahead when Lewis Travis scored, only for Hayden Coulson to step off the bench and grab an equaliser.