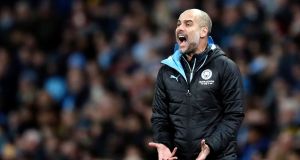 Pep Guardiola has again urged Manchester City fans to attend the Etihad Stadium, calling on them to ensure the venue is “full, full, full” for every game.

Following Sunday’s FA Cup fourth-round win over Fulham, Guardiola questioned why there were not more than the 39,223 at a ground that holds 55,097. This drew an unhappy response from the official supporters club. Kevin Parker, its secretary, said: “He’s playing into the hands of the ‘Emptyhad’ critics.”

Tickets remain on sale for Wednesday’s Carabao Cup semi-final second leg against Manchester United - City hold a 3-1 lead from the opening leg at Old Trafford – and speaking ahead of the game, Guardiola said: “First of all, I understand – never was it my intention to offend them [FANS]. They are part of us. Since I arrived here from day one until the last day what I want is to fight and play as good as possible [AND]to see Etihad Stadium full every single game. It belongs to us to play good to seduce them to come because the only reason we do our job and I do my job is not for the titles. It’s to go to the Etihad Stadium and see is absolutely full.”

Yet Guardiola stated he would “push” for more supporters to attend. “We try to do our best to let them be proud for our team,” he said. “But I will try again to push them to be with us as much as possible – if it is possible, to be every single game full full full.

“I know how to appreciate [THEIR SUPPORT]because I know how many people come when we play away. We feel them, they chant, and it is so nice to have them and I know for them it’s not easy. That is why I will always be grateful to the support.”

Clarifying his remarks at the weekend, the Catalan said: “I understand it’s difficult for the people to do that. It’s not necessary to tell me because I was part of that when I was a little boy with Mum and Dad. Since I arrive here I learn from English football how important are the Premier League and the FA Cup - more important [AT]this club than the Champions League: much more.

“It was my mistake that I thought: ‘Oh it’s Sunday 1pm, today will be full’ and I didn’t know it was on BBC, not Sky, so they can watch it and people can decide whether to go to the stadium or not.”

City have announced that Fernandinho has signed a one-year-contract extension that will keep him at the club until the summer of 2021.

“This is the best possible news,” said the Brazilian. “I want to take this opportunity to put on record how grateful I am to my teammates and the backroom staff here at City. Without them, this deal would not be possible, so sincere thanks to every single one of them.

“I have enjoyed every second of my time at City. I never expected to build such a meaningful relationship with the Club and the fans, but it has happened, and I am grateful every single day.”

1 Tipping Point: Eddie Jones’s rhetoric is out of place in a febrile political climate
2 Ireland backrow of O’Mahony, Van der Flier and Stander to be retained against England
3 Triple bogey costs Rory McIlroy as Adam Scott prevails at Riviera
4 On healing and wild hurling: The re-education of Diarmuid Lyng
5 Dan McFarland calls out Ulster’s naivety after loss away to Ospreys
Real news has value SUBSCRIBE