Premier League round-up: Everton come from two down to win at Watford 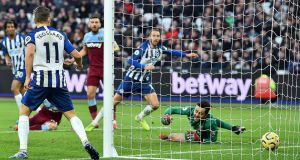 West Ham United slipped into the Premier League relegation zone after giving up a two goal lead as they were held 3-3 at home to fellow strugglers Brighton & Hove Albion on Saturday.

Issa Diop put West Ham ahead on the half hour, sliding in to poke home a Robert Snodgrass free kick, whipped in from the left. Snodgrass then doubled the advantage on the stroke of halftime, latching on to a Brighton clearance and blasting home from the edge of the box.

Brighton got back in the game in fortunate fashion when West Ham keeper Lukasz Fabianski’s attempted punch clear struck the back of his team mate Angelo Ogbonna and flew into the net.

But the Hammers looked to have made sure of the points with another Snodgrass thunderbolt, this time from outside of the box as he superbly volleyed a clearance into the top corner to make it 3-1.

A defensive mix-up between Ogbonna and Diop allowed Brighton midfielder Pascal Gross to break free and convert to reduce West Ham’s lead to a single goal. Veteran Brighton striker Glenn Murray then grabbed the equaliser in the 79th minute from close range and although there was a suspicion of handball before the 36-year-old slotted home, VAR allowed the goal to stand.

Brighton looked the more likely to win the game and needed a superb save from Fabianski to deny Solly March near the end.

Bournemouth climbed out of the relegation zone after they held on for a 2-1 win over Aston Villa at the Vitality Stadium on Saturday, despite being reduced to 10 men for the majority of the second half.

Philip Billing broke the deadlock for the hosts when he slotted home a side-footed finish from close range, connecting with a knockdown from Dan Gosling. Bournemouth doubled their lead minutes before halftime after Fraser’s initial shot was saved by Villa goalkeeper Pepe Reina, only for Nathan Ake to score from the rebound.

Jefferson Lerma, who found himself on a yellow card inside the opening 20 minutes, was sent off for the hosts early in the second half after he fouled Villa midfielder Jack Grealish deep inside his own half.

Villa pulled themselves back into the contest when Tanzanian forward Mbwana Samatta scored on his Premier League debut, reacting quickest to nod home Keinan Davis’ deflected effort. But Bournemouth held on to leapfrog Villa and move up to 16th in the table.

Everton fought back from two goals down at Watford to earn a remarkable 3-2 win with just 10 men, prevailing in a dramatic finish to an entertaining contest between two sides who are looking re-energised under new management.

After starting their stirring comeback with two first-half stoppage-time goals from Yerry Mina, Everton were a man down for the final 20 minutes after Fabian Delph was sent off for a second yellow card foul. Despite being under the cosh, Theo Walcott sealed the most unlikely of wins, tapping in after a 90th minute counter-attack with a winner that leaves Watford still struggling one place from the bottom of the league.

Watford’s impressive revival under the stewardship of Nigel Pearson had earlier looked set to continue as they went two up through Adam Masina’s 10th minute goal, his first in the Premier League, and Roberto Pereyra’s smart 42nd minute finish. Yet Everton, displaying impressive new-found enterprise under Carlo Ancelotti, struck back with two goals in three minutes just before the break, with their unlikely saviour being the Colombian defender Mina.

Having struck in the first minute of added time when he bundled the ball home after a goalmouth scramble, he then headed in the equaliser on the stroke of half time. After the break Everton looked the more threatening until Delph’s expulsion for two yellow card offences in the space of a quarter of an hour.

A terrible blunder from Crystal Palace goalkeeper Vicente Guaita helped Sheffield United to a 1-0 Premier League victory at Selhurst Park on Saturday. Guaita failed to handle United midfielder Oliver Norwood’s whipped corner as the Spanish keeper carried it over the line to hand the visitors the lead in the 58th minute.

Palace’s afternoon almost went from bad to worse Joel Ward was shown a straight red card for a rash challenge with less than 20 minutes to play, before referee Andy Madley referred to the pitchside monitor to downgrade the punishment to a yellow. Despite dominating possession, Palace attackers Wilfried Zaha and Christian Benteke failed to create chances in the second half.

The result meant Sheffield United collected their second win in four league matches as Chris Wilder’s side provisionally moved up to fifth in the league standings.

Newcastle United had goalkeeper Martin Dubravka to thank as they climbed to 10th spot in the table following a tense but scoreless draw with Norwich City at St James’s Park on Saturday.

Despite being bottom of the table, the visitors came out all guns blazing, playing much of the opening 45 minutes in the Newcastle half and forcing Dubravka into two fine first-half saves to keep the scoreline level.

Norwich created plenty of chances and won a slew of corners, but all too often they struggled to get many of them on target. When they did, Dubravka was equal to the task. Finnish forward Teemo Pukki, Norwich’s top scorer in the Premier League with 11 goals this season, had a great chance to put his side ahead in the 73rd minute, but again Dubravka was quickest to react and Ciaran Clarke was able to clear the danger.

With Norwich pouring forward, new loan signing Danny Rose came on as a substitute to make his debut for Newcastle, and they had to work hard to repel yet another Norwich corner deep into stoppage time. The final whistle prompted boos from the home supporters but favourable results in the day’s other games saw Newcastle rise to 10th place while Norwich remain bottom of the league on 18 points, both from 25 games.

1 Ireland 23 Georgia 10: How the Irish players rated
2 Ireland grind their way to grisly win over Georgia
3 Jim McGuinness: There is a way to save championship and make it competitive
4 Sordid murder of hurling brothers still resonates in south Galway
5 Car sliced in half but Grosjean survives huge crash at Bahrain Grand Prix
Real news has value SUBSCRIBE