Brighton and Southampton all square on the south coast 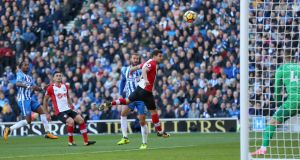 This evenly matched contest in which the visitors took an early lead only to be pulled back in the second half will not trouble the headlines for long. Nor will the result change the perceptions as to where these two clubs, just one point apart in mid-table, fit in the emerging Premier League picture.

Brighton & Hove Albion came into this game no longer everyone’s favourites for relegation after a solid start to the Premiership season, culminating in the thumping of West Ham United at the London Stadium 10 days ago. Southampton, for their part, were still troubled by a sense of uncertainty. Indeed if you include Claude Puel’s reign then the jury has been out on the Saints for longer than the average fraud trial.

Goals are the main concern for Mauricio Pellegrino’s team; they came into the match with only eight to their name in nine games and a goal difference of minus one. Brighton, meanwhile, had been notable for their defensive obduracy. Football being what it is, therefore, it was predictable that Saints would open the scoring within minutes.

Saints had boasted the majority of possession in the opening moments, without showing much in the way of a cutting edge, before Sofiane Boufal drew a foul from Dale Stephens on the edge of the Brighton box. It wasn’t much of a foul, if indeed it was one at all, but James Ward-Prowse made the most of the dubious advantage. Standing square of the ball, the former England under-21 player took a minimal run up and made a perfect connection with the ball as it flew over the wall and clanged off Matthew Ryan’s crossbar. Shane Duffy did his best to get across to the rebound, but Steven Davis did better and forced a bouncing header into the net.

Brighton are not used to being broken open so quickly in matches, but equally they are not at their most comfortable when chasing a match. The result for the following 20 minutes was stasis. Only in the closing minutes of the half did the home side’s forwards, Anthony Knockaert and Jose Izquierdo, start to make an impression on the match. In the 42nd minute Knockaert’s volleyed cross-shot might have gone anywhere, including the back of the net, and from a follow-up move Duffy headed over.

While Brighton had not created much in the way of chances, the truth was that their attacking play had been faster and more confident than in the opening weeks of the season. Izquierdo’s pace was a real threat, while Knockaert is growing in confidence with each passing match. Both were making the impressive Saints back four work hard for their corn.

Within seven minutes of the restart the scores were level. Knockaert was central to the move, the ball bouncing off his hand and then coming back to him off a deflection. The Frenchman then had the presence of mind to play the ball calmly to Pascal Gross who was waiting wide right. The German swung a deep cross to Glenn Murray who had peeled off his marker and used his height advantage over right-back Cédric Soares to head past Fraser Forster at the near post. Once again there will be questions over the England keeper, whose positioning was suspect and his reactions slow.

The game opened up for a short period afterwards, with Manolo Gabbiadini forcing a strong block from Lewis Dunk six yards out and Izquierdo doing the same from Virgil van Dijk. But as both coaches sought ways to effect minor change through tactical substitutions it became clear that both would be happy with a point, and so it came to pass.