Jesse Lingard on the double as United beat Swansea 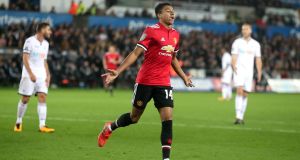 Manchester United coasted into the quarter-finals of the Carabao Cup as the holders and five-times winners comfortably picked off Swansea City.

Jose Mourinho had questioned the attitude of his players after the Premier League defeat at Huddersfield Town on Saturday but this thoroughly professional display from a much changed and youthful United lineup will have yielded plenty of encouragement.

A superb Jesse Lingard double sealed a routine victory over Paul Clement’s side, who have won only once at the Liberty Stadium this season.

Clement said he discussed United’s defeat with his players but it probably bore little relevance given Mourinho made seven changes. There were starts for the academy graduates Scott McTominay and Axel Tuanzebe, on the club’s books since aged eight and five respectively. United breezed past Swansea 4-0 in August but Daley Blind was the only survivor from the side who started that early-season victory.

Despite wholesale changes, there was still no room for Luke Shaw, who was named among the substitutes, alongside Romelu Lukaku and Henrik Mkhitaryan. It means Shaw, who became the world’s most expensive teenager in 2014 after arriving from Southampton, has played only 45 minutes this season, which came at Burton Albion in the previous round. The 22-year-old’s future remains increasingly uncertain.

Clement though went one better, making eight changes from the side who lost at home to Leicester City on Saturday. Oli McBurnie, prolific for the Swansea Under-23 side, led the line, while Roque Mesa, a GBP11m summer signing from Las Palmas made his fourth start, wearing the No51 shirt.

After Mourinho criticised his players for failing to compete during Saturday’s defeat at Huddersfield, he demanded his players rise to the challenge on a stormy night in south Wales. They made a fast start, with Chris Smalling outjumping Alfie Mawson to power a header wide from Marcus Rashford’s corner inside two minutes. Then Lingard forced Kristoffer Nordfeldt to tip over before he slid in Anthony Martial, who failed to gain control of the ball. United did not have to wait too much longer, though, with Lingard scoring a beautiful opener after 21 minutes.

Ander Herrera fizzed a ball into the feet of Rashford, whose classy first-time flick ran straight through the legs of Mike van der Hoorn and into the path of Lingard. Bearing down on Nordfeldt, he curled the ball low into the corner of the Swansea goal. Lingard’s trademark Drake-inspired flute celebration immediately followed.

Things went from bad to worse for Swansea seven minutes before the interval when Martin Olsson was forced off with a hamstring injury. In the buildup, Clement had bemoaned his lack of cover at left-back. “If there is an issue, who would be able to step in?” Clement had said.

The hosts rallied, with Sam Clucas going close from distance while the ball cannoned off McBurnie’s thigh and just wide of Sergio Romero’s post, but United suffered no major scares before heading down the tunnel at the break.

After the break, United patiently searched for a second and found one when Lingard, completely unmarked, headed home from the edge of the box on the hour mark. Tuanzebe, the 19-year old who looked assured from start to finish (a late challenge on Jordan Ayew aside), eased past two Swansea players before picking out Matteo Darmian, whose floated cross from the right was superbly guided home by Lingard running at full tilt.

Clement summoned top-scorer Tammy Abraham, who instantly forced Romero into a save but the reliance on the Chelsea loanee finding a spark must be of concern.

Mourinho introduced Romelu Lukaku and Nemanja Matic, by which point United were in cruise control. Then came Shaw, who replaced Martial four minutes from time. Leroy Fer forced an injury-time stop from Romero following a corner but that was the only real fright for United.