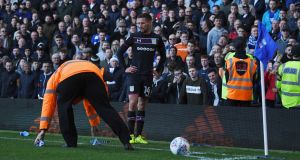 The usual debates will rumble locally about who deserved what but, in summary, neither Birmingham City nor Aston Villa can really complain. This 125th derby between the two clubs was as brisk an affair as anyone might expect but lacked the quality to earn one of them clear superiority. The point was proved shortly after half-time when Jota, the Birmingham playmaker, blew the kind of opportunity that should beckon lifelong hero status; Villa would go on to hit the woodwork twice in quick succession but these were isolated moments of genuine excitement in a game that offered little clue about the second city rivals’ prospects at either end of the Championship table.

Few occasions in English football have this fixture’s visceral appeal and there was a knife-edge feel from the start. Supporters on all four sides of St Andrew’s remained standing, creating a close and uncomfortable environment that bayed for the smallest whiff of encouragement. Maikel Kieftenbeld provided some in the 10th minute, drawing a gutteral roar with a crunching tackle on Albert Adomah, although by then the home fans could already have been becalmed. Jonathan Kodjia headed wide when decently placed in the opening exchanges and, while Birmingham were sharp in the challenge and sparky on the break, Villa held the greater early poise. That was a quality Robert Snodgrass needed to exhibit when showered with paper clappers from the north-east corner as he prepared to take a set-piece on the quarter-hour; his delivery, when it came, was met by a darting John Terry but Tomasz Kuszczak was well positioned to gather.

Birmingham steadied themselves to earn a greater share of the territory although direct threat was sporadic. The diminutive Jota, an outlier among a team of giants, looked most likely to provide it from his perch on the right; twice he cut inside to shoot only for timely blocks from Glenn Whelan to quell the danger, before a marginally more successful effort found its way through to Sam Johnstone.

Jota was, indirectly, behind the first half’s nearest approximation to drama. He had neatly sent David Davis to the byline only for the midfielder to centre into Johnstone’s arms. The goalkeeper, choosing to kick from the ground after those around him had dispersed, did not seem especially harassed but hammered his clearance straight into the approaching Isaac Vassell. The ball flew just wide; Johnstone looked mightily relieved and, had he been punished fully, the goal would have reflected the contest’s scruffiness.

Vassell’s endeavour did, in fairness, highlight that Birmingham were getting on top and they made a chance of cleaner origin when Cheikh Ndoye, having risen at the far post, might have done better than head straight at Johnstone. The spell was cause for encouragement although what passed for rhythm was interrupted shortly before the interval when Vassell, injured in a challenge with Alan Hutton, was forced to make way for Sam Gallagher.

Birmingham had come to look the hungrier and, three minutes into the second half, Jota missed his big chance to earn some reward. He was characteristically sharp in intercepting Conor Hourihane’s undercooked pass to Terry and, darting clear, looked certain to score. Instead the composure that had marked his performance deserted him and, 12 yards from goal, he fired wildly over.

St Andrew’s howled and then, geed up by Davis’s waving arms, appealed for more. Gallagher almost reached a Jota cross and then, jutting out a leg as Marc Roberts volleyed across goal, diverted a half-chance over. Villa were on the rack and it was no surprise to see Snodgrass, by now a passenger, replaced by the sturdier Mile Jedinak after an hour.

Almost immediately a rare moment of cohesion brought an accurate right-wing delivery from Adomah and a towering header from Kodjia, which was brilliantly clawed away by Kuszczak. Terry then flicked a free-kick just past the far post and the thought grew that Birmingham’s profligacy risked unhappy consequences.

Roberts took a yellow card for his team, chopping Kodjia down in full flight. The pendulum had swung now and Keinan Davis, who had only just replaced Hourihane, cracked against the crossbar from an angle with 13 minutes left after Kuszczak had blocked at the feet of Alan Hutton. Then Kodjia, weaving in and out, saw a dipping shot brush the same frame and Villa were now playing with the swagger of likely winners. But no goal arrived, Adomah lifting a free-kick over with the game’s very last action, and that was ultimately a fair reflection.