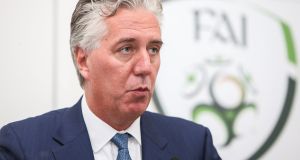 FAI Chief Executive John Delaney pictured at the FAI Football For All Strategic Plan Launch. The organisation will receive over €7 million should Ireland beat Denmark and reach the World Cup. Photo: Gary Carr/Inpho

The FAI stands to gain around €7.75 million in guaranteed prize money if Martin O’Neill and his players can beat Denmark over the two legs of their World Cup play-off after Fifa increased the total amount up for grabs by 12 per cent at a meeting on Friday morning in Kolkata, India.

The total prize fund for the competition in Russia next summer will be $400 million (€344 million), up from $358 million three years ago. If, as expected, the distribution of the money is broadly in line with the tournament in Brazil then the 16 teams eliminated in the first round will receive around $9 million (€7.75 million) each with qualification to the first knockout round worth an additional €850,000.

Making the quarter-finals in Brazil meant a significant step up in terms of the amount of prize money received and, assuming the proportions are the same on this occasion, then the FAI would be line to receive an additional €4.25 million in the event that the Irish team, having successfully qualified for the tournament, emulated Jack Charlton’s team of 1990 by making it all the way to the last eight.

Every team participating at the event in 2014 received $1.5 million (around €1.3 million) to cover the cost of the team’s participation or help with preparations and the corresponding figure is likely to be broadly similar. Fifa also spends substantial sums on player insurance and compensation to the clubs whose players participate in the event. League of Ireland sides generally miss out on these payments as they tend to be represented very minimally, if at all, even in the qualifying stage of the tournament.

Based on the 12 per cent increase, which is lower than had been predicted in some quarters, the winners in Russia can expect to receive almost $40 million or just about €35 million at current exchange rates.

Fifa has also announced new structures for the bid process for the 2026 World Cup after the processes for 2018 and 2022 were repeatedly hit by allegations of bribery and corruption. A new “Bid Evaluation Task Force” has been established and this will include the chairs of both the Audit and Compliance Committee and the Governance Committee as well as a number of other senior officials.

The move is clearly intended to prevent elected officers profiting from the selection procedure as had repeatedly happened in the past although there has been some controversy as to whether Fifa president Gianni Infantino has exerted inappropriate levels of influence over the make-up of committees that were clearly intended to be independent when they were established.

The bidding process for the 2026 World Cup, which will be the first to involve 48 teams, has already been delayed because of the various scandals to hit Fifa over the past couple of years. Morocco has bid to host the event but a joint bid between Canada, Mexico and the United States is widely expected to be successful.

1 Andy Farrell hands Billy Burns first Ireland start against Georgia
2 ‘God is dead’: The world’s front pages remember Diego Maradona
3 GAA Statistics: Can Cavan and Thomas Galligan beat Dublin with the long kickout?
4 Keith Duggan: Through the glories and the disgraces, we were all Maradona addicts
5 Rugby Stats: Blame game at lineout time is on the whole team
Real news has value SUBSCRIBE
Crossword Get access to over 6,000 interactive crosswords