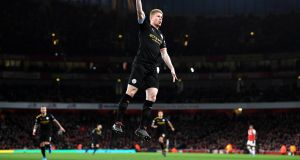 Kevin De Bruyne celebrates the first of his two goals for Manchester City against Arsenal at the Emirates Stadium. Photograph: Shaun Botterill/Getty Images

At times during the opening half hour of this game there was a kind of stillness around the Emirates, the sound of 50,000 people following with a quiet sense of awe the angles, the flow, the beautifully precise moving parts whenever Kevin De Bruyne got the ball.

Unfortunately for the home support that number included the 11 Arsenal players charged with the job of winning this game, or at least of providing something more than simply an audience. But nobody’s perfect. And hey, have you actually seen this guy?

By half-time there was something tender, almost Pavlovian in the way the red and white shirts shrunk back as De Bruyne got the ball, like rescue dogs startled by the traffic. It was painful to watch at times. Mostly, though, it was simply exhilarating.

What a player! There were two games going on here, intersecting like an overdub: the one between Arsenal and Manchester City; and the other one where De Bruyne had the ball, at which point everything else just seemed to melt away.

It didn’t take an expert eye to pick this out. De Bruyne opened the scoring after 90 seconds. What kind of goal was it? Well, guess what: it was absolutely brilliant, albeit mixed with a first glimpse of that soft red and white underbelly.

Fernandinho stepped into midfield and played a fine through pass between left-back and centre-half. The attempt from Calum Chambers to intercept or even make some physical impression on Gabriel Jesus was laughably timid.

Jesus pulled the ball back across the width of the area. At which point De Bruyne took a quick Polaroid. Ball bouncing out, goalkeeper scrambling across. Gap to his left half-covered by defenders.

Numbers crunched, the shot was brutal perfection, struck with refined power, but just too high for the covering defenders, and bouncing down off the roof of the net in gloriously cinematic fashion.

De Bruyne was, of course, greatly helped by the opposition, an Arsenal team that looked at times as though they’d never actually seen a proper midfielder before. With 16 minutes gone the Arsenal defence produced something outlandish.

De Bruyne charged down the left this time. At which point Chambers and Ainsley Maitland-Niles seemed to fuse together into one being, both making the same run, both attempting to “shepherd” the best two-footed crosser in the league on to his left foot quite close to goal. Okay then. The cross was low and hard, the finish from Raheem Sterling neat.

City had scored twice from two serious attacks. The only remaining questions seemed to be, how badly do we want to carve up this team? How seriously do we need to hurt these people? How ruthless do we feel?

There were some other questions too. For example, why hasn’t Phil Foden made more starts in the Premier League? This was his first since Leicester last season. The game brought its own answer. See that other fellow there with the ginger hair. That’s the level.

Foden played quite well on the left of the front three, right up until the moment he was abruptly taken off by Pep Guardiola 10 minutes into the second half. Foden’s first touch was a lovely little one-touch lay-off, taking the heat out of a feral dash forward by Kyle Walker, like a soothing hand to the brow. Whatever Foden becomes he will always have that comfort with the ball, the ability to absorb possession and move it on with frictionless ease.

It was Foden’s pass that made the third goal and De Bruyne’s second. As he nudged the ball forward De Bruyne let it run indulgently, enjoying the perfect weight, matching his stride to its revolutions. The shot zinged into the corner.

And moments later it was Foden-De Bruyne again, this time teeing De Bruyne up for a right-footed drive that was palmed brilliantly on to the post by Bernd Leno, preventing what would have been a wonderful 45-minute hat-trick.

Other questions? How about the oddity of statistics on days like these.

With half an hour gone De Bruyne had completed seven passes and lost the ball nine times. He had instead simply glided in between the number, spreading alarm and confusion wherever he found space; which was, for the avoidance of doubt, everywhere.

How about Arsenal in the middle of all this? It has been tempting to feel the current poor run a little too deeply, to see a kind of sickness here.

There was once a dream that was Arsenal. But what is it exactly? What are its limits? A handful of defenders with the will to actually obstruct the opposition would make a huge difference. As would a functioning attacking plan. One obvious outlet here: get the ball to Pierre-Emerick Aubameyang.

Real life outcome: Aubameyang touched the ball eight times in the first half, three of which were kick-offs.

Otherwise, this was simply an occasion to admire in miniature that central performance, to find the right way to praise De Bruyne. This is a player so good he makes the game look silly or soft at times; and around whom the next five months will surely revolve if City are to transform their own enduring midfield brilliance into trophies.