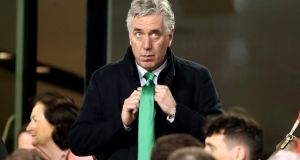 The DDSL issued a statement back in March in support of John Delaney. Photograph: Inpho

DDSL Chairman Paddy Dempsey has withdrawn his nomination for the vacancy on the FAI board created by the resignation of John Earley on Thursday night.

Dempsey was only put forward on Saturday at a meeting of the Schoolboy Football Association of Ireland (SFAI) held to consider who would replace Earley. The association shares a board constituency with the women’s game but numerically dominates to such an extent that the election of its nominee is effectively a formality.

The announcement that Dempsey was to be put forward prompted calls on social media for him to clarify the circumstances around the DDSL having issued a statement back in March in support of John Delaney at a time when the former FAI CEO’s continued employment at the organisation was widely viewed as becoming increasingly untenable.

A number of constituent clubs expressed anger at the contents of the statement, saying that they did not reflect their views and it was claimed that the board of the league had not formally approved it.

In a statement issued on Sunday evening, however, Dempsey said that he was withdrawing after having realised the scale of the commitment involved: “on reflection, I now appreciate that because of family and work commitments I would not be able to devote my full commitment to a role which is sure to be demanding,” he says.

“I recognise that the game and those elected to the board of the Football Association of Ireland requires a huge demand on their time and energies.”

Rory McIlroy makes a slick start to 2020 with opening 67 22:19
Wolves left to rue profligacy as Liverpool roll on 22:13
Annalise Murphy is runner-up in Melbourne as Round Ireland race takes shape 22:11
Mixed fortunes for Meadow and Maguire on LPGA seasonal bow 20:20
Kellie Harrington guaranteed a medal on her Bulgarian return 19:21