Jan Vertonghen and Tottenham sink Wolves at the death 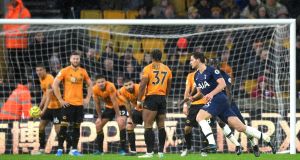 Jan Vertonghen powered a limp Tottenham to a scrappy, last-ditch 2-1 victory over Wolves. After two wonderful strikes from Lucas Moura and Adama Traoré, he grabbed the winner with a last-minute header in a game otherwise dominated by the home side.

Throughout his short tenure in north London, José Mourinho has pointed out the difficulty of sweeping into a team in the middle of the season and attempting to impart his methods with so little training time, and the enduring question mark has been just how he should configure his midfield pairing. After Eric Dier, Harry Winks, Moussa Sissoko and Tanguy Ndombele all occupied the midfield in recent weeks, Sunday seemed to mark a decision as the pairing of Dier and Sissoko, which figured in last weekend’s 5-0 obliteration of Burnley, retained their places. It is the first time Tottenham have fielded an identical team in consecutive games since 2017.

Though they have struggled to deal with their dysfunctional midfield, this season Tottenham have been defined by the individual brilliance of their purring front four, with Dele Alli, Harry Kane and Son Heung-min all combining with such ease. They have propelled their team to 17 goals in their last six games and they have made Mourinho’s team fun.

It was individual brilliance that once again made the difference as Tottenham took the lead courtesy of a gorgeous strike from Moura from the right. The away team withstood a dominant early spell of possession from Wolves, before seizing on a loose ball and breaking fast. Son provided Tottenham with their first big chance, firing a left footed shot from close range. Wolves keeper Rui Patricio was equal to the first shot, but Dier picked up the ball and immediately found Moura, who dribbled at the defence, left two defenders behind, and then obliterated his strike into the roof of the net.

Wolves have underlined their identity as one of the most cohesive and identifiable teams in the league and they quickly shook off the early goal to stamp their mark on the game. It was Wolves that commanded possession throughout the first half and as they slowly grew into the game, their passing becoming faster and slicker, they bypassed the Tottenham midfield with ease and then the chances came.

Down Wolves’ right flank, Vertonghen, Son and Toby Alderweireld were all collectively charged with stymieing the attack of Traoré, the fastest player in the league, and for good reason as he came close with a low strike out wide. Wolves’ best player in the first half could be found causing havoc on the opposite flank. After scoring five goals in his last two games, including an 11 minute hat-trick against Besiktas in midweek, confidence flowed throughout Diogo Jota as he dribbled at the Tottenham defence and provided a constant direct menace.

The Wolves men simply picked up where they left off in the second half, coming in waves at the Tottenham defence. It was Traoré, who is finally showing everything he can do this season, who wrestled the game level with a strike equal to Moura’s first half finish. Jiménez threaded a trademark outside of the boot ball to Traoré on the edge of the area, before the Spaniard glided forward and blasted the ball into the net. Simple but effective.

The goal sparked the game into life, with an isolated Kane finding more of the ball, but Paulo Gazzaniga had to make a brilliant reflex save from a powerful header by Romain Saïss to keep his team level.

Then came Vertonghen, who ended Wolves’ historic 11 game unbeaten run in cruel fashion, against the run of play. Mourinho’s goal is to convert his team into winners, and stealing victory against one of the better teams in the Premier League this season seems like a good place to begin. - Guardian