Arsenal back to winning ways thanks to Mesut Ozil strike 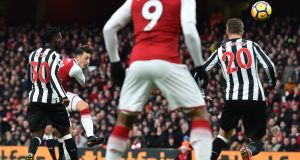 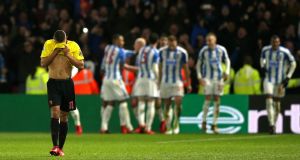 Arsenal returned to winning ways but had Mesut Ozil to thank for scoring a wonderful winner as they toiled against out-of-form Newcastle.

Having taken just two points from their last three games, Gunners boss Arsene Wenger could not have wished for a better game in which to register a first Premier League win of the month.

But the performance in a tight 1-0 victory over the Magpies was met with incredulity from pockets of the home fans, with the likes of Alexis Sanchez and the recalled Alexandre Lacazette struggling to make an impact once again.

Newcastle are without a league victory since October 21st and their slide into the relegation battle continued despite a determined showing here, with profligate finishing their main issue.

Lacazette came back into the Arsenal side as Wenger made just one alteration from the midweek stalemate at West Ham.

The club-record signing saw an early shot deflected into the path of Hector Bellerin, whose own drive was blocked and went behind for a corner.

Ainsley Maitland-Niles surprisingly kept his place at left-back as Sead Kolasinac was only named among the Arsenal substitutes.

The youngster almost opened the scoring following a jinking run into the Newcastle half but his shot was just the wrong side of a post.

The opener came at the midway point of the first half. Sanchez’s strike was blocked by DeAndre Yedlin with the headed clearance then dropping to Ozil, whose controlled volley was weighted perfectly to beat Ireland international Rob Elliot in the Newcastle goal.

He came close to adding a second soon after, while Granit Xhaka and Sanchez both flashed low efforts wide as the hosts enjoyed domination without being able to build on their lead before the interval.

Elliot showed superb reactions to push the ball away from the toe of Alex Iwobi at the start of the second half before substitute Matt Ritchie blazed over when well placed.

Rafael Benitez’s side were starting to enjoy rare forays forward and Jacob Murphy forced Petr Cech into a low save soon after.

Wenger reacted by introducing Danny Welbeck and Olivier Giroud from the bench, the latter involved immediately as he nodded down a cross to Jack Wilshere, whose effort was too close to Elliot.

Joselu saw a shot deflect off Xhaka and screw just wide with Cech completely wrong-footed as the home fans began to voice their dissatisfaction with the display of their side.

Despite their protestations, Arsenal saw out the game to record their 10th consecutive Premier League win over Newcastle, moving back into the top four in the process.

Albion dominated for long spells at the Amex Stadium but their search for a first Premier League victory since the start of November goes on after Murray blazed his 36th-minute spot-kick high over the crossbar.

Anthony Knockaert had earlier rattled the woodwork for the Seagulls, while Sean Dyche’s Clarets could have won it late on through Chris Wood as they missed a chance to move to fourth in the table.

It was the first top-flight meeting between the two clubs and Brighton boss Chris Hughton made four changes following the midweek defeat to Tottenham at Wembley in a bid to end his side’s recent slump.

Murray was one of the men recalled and he headed an early opportunity straight at Clarets goalkeeper Nick Pope after being picked out by Bruno’s right-wing centre.

Johann Berg Gudmundsson’s low shot then forced a rare first-half save out of Mathew Ryan in the 21st minute before the hosts almost edged ahead moments later.

Frenchman Knockaert connected well with Pascal Gross’ delivery from the right, only to see his powerful effort rebound off the right post with diving Clarets keeper Pope beaten.

Albion, unbeaten in their previous six league matches against Burnley, continued to push forward and defender Lewis Dunk was unlucky with a header which was nodded off the line by Phil Bardsley following Gross’ left-wing corner.

Dyche appeared to be agitated with numerous decisions going against his team, while the home crowd regularly vented their frustration at perceived time wasting from the visitors.

Dyche had reason to be concerned 10 minutes before the break when the Seagulls were given a golden opportunity to grab the goal their dominance deserved with the award of a penalty for James Tarkowski’s clumsy challenge on Murray.

Brighton’s five-goal top-scorer, who had been going away from goal when he was upended by the Burnley defender, stepped up to take the spot-kick but wastefully powered his effort over Pope’s crossbar.

The hosts were thrashed 5-1 by Liverpool in their last home game and there was a danger they would be made to pay for their first-half profligacy.

Burnley striker Wood, who spent the 2010/11 season on loan with the Seagulls, had an early sight of goal in the second half but Ryan comfortably saved his relatively tame attempt.

Wood did have the ball in the net on the hour mark, finishing from close range after Ryan had twice denied Scott Arfield, only to see the effort ruled out by an offside flag.

Given their recent high standards, it was a below-par display from the Clarets, although they should have secured all three points 17 minutes from time.

Substitute Ashley Barnes, who had just been booked for barging Ryan into the back of the net, slipped through Wood but the New Zealand international’s dinked attempt was well blocked by the Brighton keeper to ensure a fourth successive draw between the sides.

Aaron Mooy’s double fired Huddersfield to a pulsating 4-1 win at Watford and only their second away win of the season.

Elias Kachunga and Mooy put Huddersfield two goals to the good at Vicarage Road before Troy Deeney was sent off for a dangerous lunge on Colin Quaner.

Laurent Depoitre added a third for the visitors shortly after half-time only for Watford to threaten a comeback when Huddersfield’s Jonathan Hogg was shown a second yellow card and Abdoulaye Doucoure reduced the deficit with a sweet half-volley.

Doucoure, however, then turned villain by fouling Depoitre in the box late on and Mooy banged in his second, Huddersfield’s fourth, from the penalty spot to cap a thrilling victory.

Stoke slumped to a fifth defeat in six to heap further pressure on Mark Hughes as West Ham’s Marko Arnautovic came back to haunt his old club in a 3-0 win.

Chants of “Hughes Out” and “sacked in the morning” were heard from home supporters at the bet365 Stadium, where kick-off had been delayed by an hour due to a power cut.

Once proceedings got under way, David Moyes’ West Ham were sent on their way by a controversially-awarded Mark Noble penalty, which could result in retrospective punishment for Manuel Lanzini after he appeared to dive, and Hughes’ mood was darkened further by goals from Arnautovic and substitute Diafra Sakho.

It was particularly galling for Hughes that Arnautovic got on scoresheet given he was booed throughout having forced through a £25million summer move to the Hammers, who moved above the Potters in the table with this win.

Stoke chairman Peter Coates had identified this fixture and last Tuesday’s with Burnley as pivotal and Hughes’ position may now be precarious after two defeats.

A sign things would go wrong for Stoke on a pivotal afternoon arrived around an hour before kick-off when power was lost. It remained out for almost an hour, delaying kick-off and leaving thousands of fans outside the stadium because the turnstiles could not be operated.