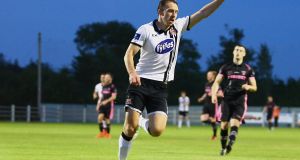 David McMillan. “I’m very hungry to succeed. I don’t doubt that I’ll get the opportunity to show what I can do.” Photograph: Ken Sutton/Inpho

David McMillan says that the chance to play in Scotland was simply too good an opportunity to turn down after a decade in the League of Ireland that culminated in a hugely successful spell at Dundalk.

The striker, who turned 29 on Thursday, says he was prepared to park his career as an architect to go full-time whether it was at home or abroad but St Johnstone boss Tommy Wright persuaded him that Perth and the Scottish Premiership represented a logical next step.

“There was a lot of interest from Dundee United,” he says, “although they sacked their manager then so that was all up in the air, and Stephen [Kenny] wanted to keep me but I went over and met Tommy and he just sold the club to me really.

“He’s been there six years and they have been in the top six every year. That’s impressive. They’ve qualified for Europe a lot of times and won the Scottish Cup under Tommy so they’ve been very, very successful in that period and that was a big part of it, to try to continue that.

“So there are a lot of good things there and obviously the attraction of the league is that there are five or six teams that are approaching averages of 20,000 a game or more; we get maybe 6,000 when Dundalk and Cork go at it. Quality-wise, Dundalk on their day might be quite close but overall the league, I suppose, is a step above in terms of facilities and attendances.”

The St Johnstone squad is back in training after the mid-season on January 8th and McMillan could in contention for a debut against Albion away in the cup on the 20th with Kilmarnock to come four days later in the league. Games against Celtic then Rangers await towards the end of February.

“Obviously clubs like that are huge and that was part of the attraction and I’m very hungry to succeed. I don’t doubt that I’ll get the opportunity to show what I can do; I think as a striker it’s probably that much easier to get that chance than it is for a defender. But if Tommy puts me in the team then it’s up to me to play well and score goals.”

McMillan, who proved his ability to make an impact in European games with Dundalk, plays down the idea that the move might lead to bigger things if goes well in terms of another move or international recognition insisting that it would be foolish to get carried away.

“I think for the moment this is a big enough challenge to be focused on. If it all goes well then the rest of it all sort of looks after itself but I can’t look beyond what I have to do at St Johnstone, I think that would be naive. I have to go and prove myself. I’m 29 now, if I play two-and-a-half-years at St Johnstone and they are reckoned to have been successful then I’ll be very happy.”