Crystal Palace score away from home at last to beat Leicester

Benteke, Wilfried Zaha and Sako among the goals as Palace move out of bottom three 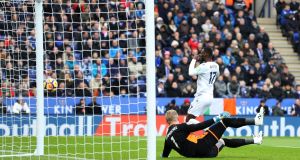 Christian Benteke put a difficult week behind him to score his first goal of the season as Crystal Palace won 3-0 at Leicester City to climb out of the Premier League’s bottom three on Saturday.

Wilfried Zaha and Bakary Sako were also on target as Palace ended an eight-month wait for an away league victory.

A week after being castigated for ignoring team orders to take, and miss, a stoppage-time penalty in a 2-2 draw with Bournemouth, Benteke made amends to put Palace in front with a glancing header from Andros Townsend’s whipped in cross.

It was Palace’s first away goal of the season.

Leicester failed to muster much of a response and were punished for their lacklustre approach five minutes before halftime when Benteke played in Zaha who out-foxed Ben Chilwell before drilling a low shot past Kasper Schmeichel.

The hosts did improve after the break and Riyad Mahrez was denied a goal when Palace keeper Julian Speroni made a superb save to keep out the Algerian’s powerful low shot.

Vicente Iborra had a headed goal correctly ruled out for a push on the hour and Leicester suffered a further blow a minute later when birthday boy Wilfred Ndidi received a second yellow card for a dive and was sent off.

Bakary Sako rounded off a great afternoon for Palace with a classy finish from Ruben Loftus-Cheek’s assist.

Palace moved to 14th position with 17 points from 18 games while Leicester, who had won their previous four games to move into eighth spot, have 26 points.