All in the Game: Zlatan Ibrahimovic sawn off at the ankles by Malmo fans 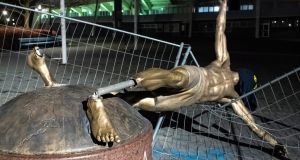 November 27th: Ibrahimovic announces he has bought a 25 per cent stake in Hammarby, Malmo’s rivals. “I think those in Malmo will be happy for me,” he said.

Later that day: Unidentified Malmo fans spray the statue with paint, set it on fire and place a toilet seat over one of its arms.

December 12th: An attempt is made to saw through the statue’s feet.

December 23rd: The nose is cut off the statue.

January 4th: The statue is finally toppled when it is sawn off at the ankles, with “take away”, written in Swedish, sprayed on it.

Conclusion: If you played for Malmo, don’t buy a 25 per cent stake in Hammarby.

We all live in the age of Haaland

Much has been written about Norwegian wonderkid Erling Braut Haaland this season after his failure to stop scoring goals for Red Bull Salzburg, and the subsequent scramble among the bulk of the planet’s clubs to sign the fella once it emerged that he would cost a mere €20 million thanks to a release clause in his contract.

It was Borussia Dortmund, of course, who won that battle in the end, which came as yet more bad news for Manchester United whose gaffer Ole Gunnar Solskjær reportedly travelled to meet his compatriot in an effort to persuade him to play alongside Jesse Lingard and the likes. For some reason, Haaland didn’t find that prospect appealing.

Lost in all the chat about Haaland, though, was a fascinating nugget of information provide by Steve McManaman. “Haaland played for Solskjær at Molde,” he told us, “when he was even younger than he is now”.

That’s almost as excellent as that old Kevin Keegan chestnut: “The 33- or 34-year-olds will be 36 or 37 by the time the next World Cup comes around, if they’re not careful.”

Revelation of the Week

The one Chelsea old boy Pat Nevin shared with BBC Radio Scotland about an incident during a holiday on the island of Arran three years ago.

“I was driving up the north side of Arran. I came around a corner at the top just before Lochranza and I nearly hit a guy on a bike. I just got out of the way at the last moment. I could have killed the guy. It was Roman Abramovich. His yacht was off the coast and he was cycling round. What a story that would have been if I had killed Roman Abramovich.”

It’d have been a biggie all right. “He doesn’t know to this day that it was me,” said Nevin.

Clarification of the Week

The one French Ligue 2 club AS Nancy (or Association Sportive Nancy-Lorraine, to give them their full but rather protracted title) had to issue to their supporters after attempting to wish them a happy new year with an online greeting card which contained GPS co-ordinates that were meant to direct them to their stadium.

“ASNL wishes to reassure its subscribers and partners. The greeting card published on Tuesday evening was an electronic mock-up. When it was created, the stadium was moved on the map and its GPS co-ordinates were changed. The greeting card that will be sent in the coming days will obviously locate your place at the Stade Marcel-Picot.”

Where did the mistakenly altered GPS co-ordinates direct them? To the city’s main cemetery, accompanied by the message: “My place is here.”

Number of the week: 4

That’s how many Irish teenage forwards have played in the Premier League this season, Adam Idah becoming the fourth – after Aaron Connolly, Troy Parrott and Michael Obafemi – when he made his debut for Norwich on New Year’s Day. The future is ours.

“It will be a bit difficult to keep him a secret now.” – Norwich manager Daniel Farke on Adam Idah blowing his cover by scoring that FA Cup hat-trick on Saturday.

“As a pair, we want to change the way the position has previously been thought about, we want to bring in a different way of thinking. Obviously there was the famous saying ‘no one wants to grow up to be a full back or a Gary Neville’ . . . ” – As if Liverpool fans didn’t love Trent Alexander-Arnold enough already.

“I felt like I was becoming the stereotype I always tried to avoid. In the last 10-15 minutes, we are launching it up to me. I am flicking it on, nicking a goal here and there. I felt degraded by it. I literally became a head on a stick.” – Peter Crouch reminiscing fondly about his spell with Burnley.

“I was rude. But I was rude with an idiot. I had bad words with the guy.”– Jose Mourinho explaining why he picked up a yellow card after a brush with a member of Southampton’s staff. The hugging ballboys phase is over, normal service is resumed.

“Pogba’s problem is Manchester: it is a club out of touch with reality, without a sporting project. Today I wouldn’t bring anyone else there, they would ruin even Maradona, Pele and Maldini.” – Mino Raiola, Pogba’s agent, who is now more likely to direct his clients to Dagenham and Redbridge rather than Old Trafford.

“Maybe I send Teemu Pukki out on loan instead.” – Daniel Farke on being asked if he still intended sending Adam Idah out on loan to a lower league club.

“I would like to clarify that in no moment did I insult Militao. My words were ‘shut your f***ing mouth’.”

Getafe defender Marc Cucurella, eh, clearing up allegations that he said something offensive to Real Madrid’s Eder Militao on Saturday.