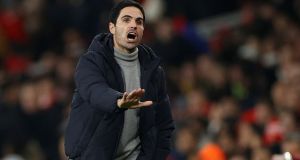 Mikel Arteta: “We’re going to try to be in the market to see options that can strengthen the team.”Photograph: John Sibley/Reuters

Calum Chambers has had knee surgery and will be out for six to nine months – an absence that will force Arsenal’s hand in the transfer window.

The centre-back was injured in the first half of Arsenal’s defeat by Chelsea on December 29th and had surgery on Thursday. Chambers will miss the rest of the season and defensive reinforcements this month have now become a priority.

“He is in London having surgery and we will know more this afternoon when he comes back from theatre,” Mikel Arteta said. “It will be a significant injury. We will see once they have gone in there and what the doctors say. It is not looking good.”

Arsenal were already alert to the possibility of strengthening this month but, with finances tight, the likelihood is that Arteta will have to wheel and deal if he is to make significant additions. Dayot Upamecano, the RB Leipzig defender, is among those who would make a suitable replacement for Chambers if funds could be freed up and Arteta confirmed the club will be active in the next four weeks.

“We’re going to try to be in the market to see options that can strengthen the team,” Arteta said.

“My obligation is to give my opinion and see if there are things we can improve. We have some bad injuries, like Calum a few days ago, and that’s going to change our plans at the back but the reality at the moment is that we are not going to be able to do much.

“I am much more concerned at the moment to get people back from injury and trying to improve the players we have, getting everybody onboard with what we’re trying to do. If something extra comes up and we think it’s the right opportunity to improve, let’s do it.”

Arteta does not expect to lose key players despite Hertha Berlin’s interest in Granit Xhaka and continued suggestions Pierre-Emerick Aubameyang would entertain a move away.

“I don’t even think about that possibility with Auba; I want him here,” Arteta said of Aubameyang, while he hopes to have talked Xhaka into staying despite the troubled midfielder’s initial preference for a move away.

“I had a conversation with him and I wanted to understand his feelings,” he said. “That’s first, and his reasoning why he was thinking [this] probably wasn’t the right place to continue his career. I gave him my opinion, my perspective, and I told him I was ready to support him from the club’s perspective and wanted his teammates to have his back and help him change his mind. We need him.”

Hertha are still pursuing Xhaka but Arteta has made his stance clear.

“I don’t want him to leave,” he said. “I said no to the club and I said no to him. After, in life, I cannot control what happens.”

1 ‘Manchester United are lucky to have you’: Klopp responds to Donegal schoolboy’s letter
2 England coach Eddie Jones apologises after making ‘half-Asian’ comment
3 Liam Toland: Larmour can distract England while others flourish
4 Cian Healy’s hunger for battle undiminished by the years
5 Rory McIlroy storms to the top of the leaderboard in Mexico with opening 65
Real news has value SUBSCRIBE