Ken Early: Give coaches a limited number of VAR appeals 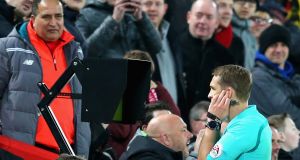 Craig Pawson, match referee, watches the VAR screen before awarding a penalty to Liverpool during The Emirates FA Cup Fourth Round match against West Brom at Anfield. Photograph: Alex Livesey/Getty

The former Uefa president Michel Platini had two reasons for being against video refereeing in football. The first was that “football has also based its popularity on injustice. You can remember them and talk about them in the bars. You can talk about 1982, France-Germany, it was an injustice like the hand of Maradona, or that of Henry”.

Injustice is interesting, was his logic. Of course, most refereeing errors don’t create real injustice of the kind that is talked about decades later. They’re just mistakes, and mistakes are banal. When was the last time you had a good conversation about Thierry Henry’s handball? There were a few interesting angles at the time, with most of them outlined by then-Ipswich manager Roy Keane, ranging from “same old Ireland, afraid to take that next step” to “where’s my goalkeeper?”

But soon after the hysteria fizzled out so did the conversations. What else was there to say? Henry cheated and got away with it, Ireland didn’t go to the World Cup, France did and it went terribly. Everyone lost.

Years later, we are only reminded of the affair whenever Thierry Henry posts something on social media and among the replies there are always a few Irish people doggedly reminding Henry that he is a “cheating prick”. No good comes of this. By now even Henry probably wishes that a VAR had been around to disallow the goal.

Purging the game of these mistakes doesn’t mean there will be nothing to argue about in the bars. Henry’s handball wasn’t even the most interesting handball-related scandal of that World Cup. That came in the quarter-final between Uruguay and Ghana at Soccer City, when Luis Suarez punched a goal-bound Ghana shot off the line in the last minute of extra-time.

That incident was interesting in a way the Henry one hadn’t been because of the moral shades of grey involved. Suarez’s defenders could argue that he hadn’t even cheated. He hadn’t got away with anything. It was just a transaction: he had bought a temporary reprieve for Uruguay with a red card and penalty.

It was hard to see it in those abstract terms if you’d been there at the time. Suarez’s foul had caused outrage in a stadium where the crowd had been hoping to cheer the first African team into the semi-finals of the World Cup. It was against the spirit of the tournament and, his critics argued, such cynical calculation was plainly against the spirit of the game too.

His defenders could reply that, on the contrary, this was precisely the kind of spirit they’d want to see in any of their players; if only every player was as willing to sacrifice themselves to save their team. It was really a conversation about whether the ends justify the means: are there situations in which it is stupid not to cheat? And VAR wouldn’t have changed a thing about it.

Platini’s other issue with video refereeing is that it would mean ever-more-frequent stoppages to check infractions of various kinds and that this would be “the death of football,” since football is a game that ideally flows on and on.

Yet the idea of the ref’s word being final has been under attack since the 1970s, when slow-motion replays were first used to hammer referees for getting real-time decisions wrong. In the last few years we reached the absurd point where the referee is almost the only person in the ground who doesn’t have access to instant multi-angle replays. Something had to be done.

But Platini’s point about more frequent stoppages remains to be answered. When Fifa’s rulemaking body, the International Football Association Board (IFAB), announced the terms by which national FAs could trial VAR, they specified that the VAR was only supposed to intercede in certain limited situations where clear and obvious errors were made.

But once you have the facility to check decisions, the natural tendency is to want to check more and more decisions: why should this possible error be corrected and that one go unchecked? The logic of the system is that the VAR will become increasingly finicky and overbearing.

On the evidence of what we have seen so far in Germany, Italy and England, the football authorities do not understand the purpose of the VAR system.

They think it has something to do with increasing the percentage of decisions that referees get right. The reason given by the head of the English referees, Mike Riley, seemed a good summation of the general official line of thought. “If we’re saying 4 per cent of decisions are wrong, a 2 per cent improvement is good for the game, as long as we don’t increase interference.”

But using VAR by definition will increase interference, since there was previously no outside interference at all. As for the 2 per cent difference in overall decision accuracy, that’s the kind of improvement only a computer could notice.

The real purpose is to cut down on all the impotent rage that football ends up venting at referees over simple mistakes. VAR should allow the participants to feel as though they are protected against the worst mistakes a referee might make. It’s to allow them to feel some sense of control over their fate, to grant some element of recourse in the face of injustice.

That is why the power to involve the VAR should be placed in the hands of the people who are responsible for most of the moaning about refereeing decisions: the coaches.

The NFL system is to give each coach two challenges per game, with a third in the event their first two challenges are upheld, and that system seems so obviously an improvement on what is happening in football, you wonder if it’s because IFAB are embarrassed to be seen copying another sport.

Right now it is the referee that decides when the VAR is used, either because the referee suspects they have missed something or because the VAR has suggested as much. The challenge system will solve this problem, since the VAR will only be consulted when one of the managers thinks there is a pressing need.

This would mean that a higher percentage of refereeing mistakes will go uncorrected compared to the current system, but if a mistake is not important enough for a manager to challenge, why should everyone have to wait around for it to be corrected?

It took almost four minutes to determine that Mohamed Salah had been fouled in the penalty area on Saturday night, meaning the crowd at Anfield collectively spent more than 3,500 man-hours waiting for the referees to decide what had happened. Not every decision is worth the wait. Give the coaches a limited number of VAR appeals, and let them get on with the game.