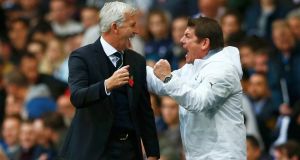 Alan Pardew had wanted an impact from his substitutes but even the Newcastle United manager could not have scripted it quite this perfectly. Trailing to Emmanuel Adebayor’s first-half goal, he introduced Sammy Ameobi and Rémy Cabella at half-time and watched them ignite a remarkable turnaround.

Ameobi took what felt like a heart-beat to make his mark, fastening onto Jack Colback’s pass to shoot beyond Hugo Lloris – the equaliser was timed at eight seconds into the second-half – while Cabella took a positively leisurely 13 minutes before his cross teed up Ayoze Pérez for what proved to be the winner.

Newcastle are hardly famed for their away form. Previously in this calendar year, they had won two of 14 matches and failed to score in nine of them. But everything came together for them in the second half here and they could build upon the home victory over Leicester City from last weekend. Mike Ashley, the club’s owner, applauded the players off at the end in enthusiastic fashion.

Tottenham Hotspur were booed off, which tends to happen in these parts when the result is bad but the frustration was understandable. They failed singularly to build on Adebayor’s goal and the initial promise of Erik Lamela and Ryan Mason, and many of their players, went missing after the interval.

This was a game that Tottenham expected to win, with Newcastle weakened by the injury-induced absence of Papiss Cissé and they did take charge early on when Adebayor punished slack marking to beat Tim Krul, who had been the hero of his team’s 1-0 win here last November.

Adebayor has endured a stuttering season and his touch was not always looked assured once more but he manoeuvred himself into the space inside the area to rise and direct his header back into the far corner from Mason’s cross. Pardew cut a lonely figure inside his technical area. It felt like a soft concession. The Tottenham move had initially broken down after Lamela and Adebayor had combined to release Nacer Chadli on the left but Mason recycled it. It was Adebayor’s second goal of the season.

Tottenham enjoyed a few nice combinations in the first half but the overall tone was one of sloppiness from both teams. Younès Kaboul blasted two crosses out of touch, which drew murmurs of exasperation from the crowd and there was lots of wild long-range shooting.

Tottenham appealed for a first-minute penalty for handball against Daryl Janmaat, following Danny Rose’s burst into the area only for the referee Anthony Taylor to remain unmoved while for Newcastle, there was a half-chance for Colback on 15 minutes. He fluffed his lines after Lloris’s attempt to punch clear.

Newcastle had offered very little before the interval but they bolted from the blocks in startling fashion in the second half. Pardew had sent his players out early and they went through a quick warm-up drill before their Tottenham counterparts had returned to the field.

Mauricio Pochettino’s players were caught stone-cold, no one more so than the right back, Eric Dier. Colback’s ball inside him ushered Ameobi through the inside left channel and his low finish arrowed into the far corner.

Pochettino was still in the tunnel when the ball hit the net.

After the season that they have had, the travelling Newcastle fans might have been forgiven for pinching themselves. But things got even better for them when Pérez enjoyed his moment of glory. The impressive Moussa Sissoko surged up the left and when he tapped the ball to Cabella, there was the suspicion of offside. There was no flag, and Pérez rushed to meet Cabella’s cross with an excellent glancing header.

Pochettino took off his coat and placed it to one side. The afternoon was getting hot for him and Tottenham. Christian Eriksen had gone close before Pérez’s goal but it was Newcastle who might have extended their lead, when Cabella wriggled free on the byline but opted to shoot rather than cut back. The ball swelled the side-netting.

Tottenham knew that it was not to be their day when Eriksen’s out-swinging corner was bundled into his own net by Krul. But the assistant referee correctly spotted that the ball had curled out before coming back in. The Tottenham substitute, Harry Kane, drew a save out of Krul but his team went with a whimper.