Lionel Messi inconsolable in dressing room after loss to Liverpool 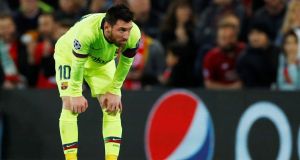 Lionel Messi broke down in tears after his dream of winning the Champions League for a fifth time with Barcelona collapsed against Liverpool.

The Argentina international was inconsolable in the Barcelona dressing room following the 4-0 defeat at Anfield, where the Spanish champions were on the receiving end of an incredible comeback in Europe for the second season running, having won the first leg 3-0 at the Camp Nou. Last season in the quarter-finals Barça beat Roma 4-1 at home but collapsed in the away leg to lose 3-0 in Rome and go out on away goals.

Messi was then selected for a drugs test by anti-doping officials and the team coach departed for Liverpool John Lennon Airport without him as a consequence.

Reports in the Spanish media have claimed that, on his eventual arrival at the airport, Messi was involved in an angry confrontation with a group of Barcelona supporters furious at their team’s latest collapse in the Champions League.

Barcelona’s president, Josep Bartomeu, described the defeat as a “disastrous night” for the club and the manager, Ernesto Valverde, accepted questions would be asked of his future following another European failure.