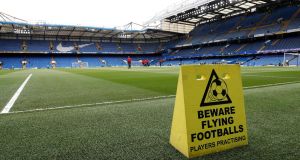 Chelsea have been told they will not be able to make first-team signings this summer or next January. Photo: Getty Images

Chelsea’s appeal to Fifa against the imposition of a two-window transfer ban has been rejected, meaning that the club will take their case to the court of arbitration for sport (Cas) in the hope of having the sanction reduced or overturned.

More immediately, Chelsea will be permitted to seek an interim ruling at Cas asking for their ban to be frozen while the final appeal is heard – which, if it is granted, could allow them to sign players this summer. The Fifa appeals body had insisted that the punishment begin in the summer, even though Chelsea’s appeal was in train.

Chelsea were found to have broken a host of rules regarding their dealings with under-18 players from foreign countries over a number of years; they were charged with 92 breaches of article 19 alone – the most serious offence – and found guilty of 29 of those cases.

Fifa’s disciplinary committee handed down the two-window ban in February and Chelsea immediately announced their intention to appeal to the governing body. It always felt as though that appeal would be doomed to failure – and they would have a better chance of winning concessions at Cas – and that has proved to be the case.

Fifa did, however, announce a small adjustment to the original punishment. Chelsea’s ban will not cover the registration of minors under the age of 16 who do not fall under the scope of article 19.

Fifa’s basic rule is that clubs cannot bring in players under 18 from other countries, unless their parents have emigrated for reasons not connected to football or both the player and club are based within 50km of a national border. Under article 19, the only other exception is for transfers within either the European Union or European Economic Area where the player is aged between 16 and 18.

A Fifa statement read: “The Fifa appeal committee has decided to partially uphold the appeal lodged by Chelsea FC against the decision of the Fifa disciplinary committee to sanction the club with a ban on registering new players at both national and international level for the next two complete and consecutive registration periods. This ban applied to the club as a whole – with the exception of the women’s and futsal teams – and did not prevent the release of players.

“With respect to all men’s teams, the ban on registering new players, both nationally and internationally for two registration periods, has been confirmed by the Fifa appeal committee, with the following exception … In the committee’s opinion, imposing a ban on registering each and every minor would not be proportionate to the offence committed.

“Consequently, the Fifa appeal committee decided that, as far as youth categories are concerned, the ban shall not cover the registration of minor players under the age of 16 who do not fall under the scope of article 19 of the regulations on the status and transfer of players.” – Guardian