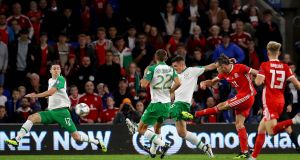 This Nations League malarkey might take a while to catch on but after a fairly devastating defeat here in their opening game of the new competition Ireland already find themselves having to play catch up. To judge by this and the news from Denmark that a deal had been done to allow Christian Eriksen and co return to the national team, Martin O’Neill’s men will do well to close the gap on their group rivals between now and November.

If you are inclined to count it as the start of a qualifying campaign then it was a bad one; the worst, in fact, since the preliminaries for the 1962 World Cup when Ireland lost their opening game, also by four goals to one, in Scotland.

The closest thing there was to consolation on this occasion was the 66th minute goal scored with remarkable composure by Shaun Wiliams after the Millwall midfielder had caught Aaron Ramsey in possession 10 yards in front of his own area and with no cover behind him. It came during what was a relatively decent spell for Ireland but there was never the slightest sense either before or after it that things were going to be somehow turned around. Matters might have been worse, indeed, had it not been for a smart save towards the end by Darren Randolph from Tyler Roberts and a terrific tackle by Seamus Coleman on David Brooks as he bore down on goal.

The Ireland manager can, of course, point to the players he was missing here and the list is certainly long given the lack of depth to his squad but Wales had no more surviving starters from last October’s encounter than their visitors. With Gareth Bale back and a significant injection of young blood they looked an altogether different team, one the Irish never looked remotely capable of physically subduing this time.

O’Neill – who went for a 4-4-2 with Cyrus Christie operating on the right hand side of midfield and debutant Callum Robinson floating in the space behind Jon Walters – must have looked at Ethan Ampadu and wondered what might have been. The 17-year-old son of a former Irish under-21 Irish international could have been playing here for Ireland but instead anchored the midfield rather nicely for Wales before making way, with the game already won, midway through the second half.

The Chelsea star is, admittedly, regarded as something quite special but the manager must still have been dismayed to see a teenager bundle Walters out of his way to take possession and ultimately set up the third goal for the home side seven minutes before the break. When this Ireland team is losing battles like that, they are always going to be fairly deep in trouble.

Less surprising was the fact that they struggled to cope with the pace, passing and movement of a side that seemed to have taken Ryan Giggs at his word when he had said on Wednesday that he wanted them go out and express themselves.

Joe Allen’s low through ball for Tom Lawrence to open the scoring was an absolute beauty while Ben Davies’s high and angled one to Bale for the second was spectacular. The Real Madrid star still had quite a bit to do but he did it brilliantly, leaving Stephen Ward, who endured a particularly difficult night before he injured himself in an awkward fall and had to be replaced, and Ciaran Clark, who didn’t have a great one either, in his slipstream before powering a shot into the top left corner.

Being made to look second best by one of the world’s best footballers is one thing but Ireland’s problems went much deeper than that with the likes of Brooks and Connor Roberts, 21 and 22 respectively, thriving in the space they were being given to get on the ball then run at opponents.

In front of the Irish back four Conor Hourihane and Jeff Hendrick struggled to meaningfully impede the home side when they were in possession and repeatedly gave the ball away themselves. The lack of pace on an attempt by the latter to release Christie into space essentially triggering the Welsh break that led to Bale’s goal.

The 29-year-old had a big hand in the fourth too, getting involved more than once in the buld up then teeing Roberts up with a pinpoint pass. O’Neill looked furious while some of his players looked more forlorn.

The friendly next week in Poland will give him an opportunity to work on more effectively countering some of the many problems presented here but he even with a couple of last night’s absentees back, he will not relish the prospect of coming up against both this side and the one that beat Ireland an additional goal so soon again. There are no softer games in which to rebuild battered confidence in the Nations League, though.

That may not be to O’Neill’s like just now but perhaps Uefa is on to something after all.