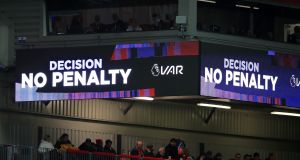 The VAR screen shows a ‘no penalty’ decision during the Premier League match at Anfield between Liverpool and Manchester City. Photograph: Peter Byrne/PA Wire

The Premier League looks set to stick to its guns over VAR and rule out substantial changes to the technology when their 20 clubs meet this week.

Dogged by controversy since its introduction to the top flight this summer, VAR has, this past weekend alone, been criticised over a Sheffield United goal disallowed for offside against Tottenham and a Trent Alexander Arnold handball that did not result in a penalty during the game between Liverpool and Manchester City.

The Premier League acknowledges there have been problems and last week apologised to Everton on behalf of the refereeing body, Professional Game Match Officials Limited (PGMOL), after VAR wrongly awarded a penalty to Spurs in their 1-1 draw at Goodison Park. At the same time there is a firm belief VAR is doing what it was meant to, with the number of correct decisions having risen as much as 10 per cent compared with this time last season.

The general manager of PGMOL, Mike Riley, will address Premier League clubs during their biannual shareholders’ meeting in London on Thursday. Lengthy discussion is expected to follow but Riley will insist these are early days for the technology and the difficulties can be worked through. Most clubs are thought to share this view.

Neil Swarbrick, the Premier League lead for referees on VAR, also echoed the sentiment in an interview with the BBC. “We have more decisions correct with VAR than without it”, he said. “If the mark now is seven [out of 10], in two years’ time I’m hoping for maybe a eight and a half or nine.

“We are open to evolving with this – it’s not a case of ‘we’re not budging’. We will listen to feedback and where we can improve things we will do.”

Other stakeholders in the game appear inclined to take the Premier League and PGMOL at their word. It remains likely any changes made before the end of the season will be cosmetic.

All agree one area that needs to be improved is the experience of fans inside stadiums. The Premier League feels its options are limited, owing to the terms of the VAR protocols initially devised by the International Football Associations Board (Ifab).

One popular solution, for example, has been to suggest playing the audio feed between a referee and his VAR over the public address system. It has been a successful approach in rugby union and the NFL but the process is ruled out by Ifab.

The Premier League also became the first competition to implement the use of video replays in stadiums in the event of a referee’s decision being overturned.

The application has been patchy, however, perhaps because Ifab – while allowing the practice – actively warns against it and the risk of “negative reactions” in the crowd . It is understood the Premier League is to clarify its guidance to clubs and PGMOL as to its use.

In another awareness-raising effort, the Premier League will produce a campaign of social media content to help fans and pundits alike better understand the technology. – Guardian