Aaron Connolly ruled out of crucial Euro qualifier against Denmark 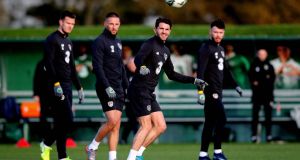 Robbie Brady: expected to be named against New Zealand due to his lack of game time with Burnley in the Premier League recently. Photograph: Ryan Byrne/Inpho

Brighton striker Aaron Connolly is out of Ireland’s two international games over the coming week due to the groin strain that prompted Graham Potter to replace him at half-time in the Premier league game against Manchester United on Sunday afternoon.

At the time, the tone of Potter’s description of the problem seemed to suggest the 19-year-old had a chance of making the international games and Mick McCarthy was clearly hopeful on Monday given that the critically important qualifier against Denmark, in particular, was not for another week.

After seeing the results of the scan performed on the player at his club, however, both medical teams have agreed that the problem is serious enough for the striker to be ruled out of both matches, something McCarthy says he accepts.

“Our team doctor Alan Byrne has spoken to the Brighton medical team and had a look at the scans [which] have confirmed the groin injury and Aaron won’t be ready in time for New Zealand and Denmark,” said the Republic of Ireland manager.

Earlier, he had suggested the teenager would be a loss, despite his very limited experience at this level.

“The Georgia game, his cameo appearance was by far better than his other appearance in Switzerland, but that could be said of all of us,” he said.

“But you can see what he brings in those 12 or 15 minutes, when he came on [in Georgia]. He’s really added something to the squad.”

McCarthy, who already has 27 players in for the two games, said he will not call in any replacement.

McCarthy admits he has not yet quite settled on how he will handle mix of demands between Thursday’s friendly against New Zealand and Monday’s much more important European Championship qualifier against Denmark and says the situation has taken him into new territory as a manager.

He said he will rest some senior players for the friendly while handing a couple of his young ones full Ireland debuts. The 60-year-old acknowledged that having to strike the right balance between the two games of such substantially different importance will be a new test for him over the coming days.

“I’ve never had this situation before. You’re asking me questions about how I do it and what happens, but I don’t really know. I’ve never had this as a player or as a manager with a friendly and then a big game coming up. It’s kind of strange for me as well and it has been in terms of picking the squad and that’s why I’ve got more players in the squad, because Monday is the important game.

“As I have said before, it’s great as some of them are going to get caps in it [the New Zealand game]. It’s great for them. But once the game is out of the way and it’s done, then on Friday it might just hit home that Monday is D-Day which is appropriate given it’s Denmark.”

“They’ll all want to be involved on Thursday; they all want to be involved but not get injured. If they’re not involved, they’ll all have a bit of a sad face. But once Thursday is out of the way (and they are not injured) they’ll know they’re involved, that’s going to make it different for them. So the excitement and anticipation and the build-up to Denmark is going to come but not up until then.”

Darren Randolph, he made clear, is one of those who will not feature in the first game with both of the squad’s other goalkeepers, Kieran O’Hara and Mark Travers, set to get a half apiece while Lee O’Connor and Troy Parrott are both being teed up for international debuts.

It all gets a little more complicated after that for the manager who must decide how to balance the demands of players like Robbie Brady and Glenn Whelan, both of whom are keen to start, he suggests, with the risk that something might happen that would rule them out of Monday.

In the case of Brady, who could play comfortably more football over the coming week with Ireland than he has done in the season so far at club level, there is clearly a need, he acknowledged, to take the chance of giving some game-time.

“Quite clearly, he was fit enough to play in the game that he did. But having five or 10 games on the bounce, that’s when you’re really at it. And then, of course, there’s a balancing act, if I do start him and he plays really well, how long do I play him? Denmark is going to be different to the New Zealand game. I don’t doubt we’ll have a really competitive game [on Thursday] but the build-up and everything is going to be different.”

Asked how a win on Monday would compare with his most celebrated success in a qualifier [the 1-0 win over the Netherlands in 2001 that did so much to get his side to the following summer’s World Cup] during his first stint in charge, McCarthy said he would not be able to say until after this game.

“But 2002 is gone, history, like anything else that I’ve done that is in the past; so because it is now, if we achieve on Monday then it will be the best.”

He shrugged off the suggestion that the Danes might be comparable to the Dutch back then in terms of quality.

“If they are,” he said, “they are beatable. But I don’t think the Dutch were on such a good run as the Danes [just one defeat, involving stand-in futsal players during a strike by the regulars, in 33 games] are now.”

1 Gordon D'Arcy: Ireland must go after victory by frightening France into mistakes
2 Henshaw the only change as Andy Farrell names Ireland team for Paris
3 Seán O’Brien: Anger over my parents’ break-up never left me
4 Giovagnoli’s appointment at Dundalk ‘a great story’ says Arsenal boss Arteta
5 Cian Healy: ‘Realistically I got away with murder when I was younger’
Real news has value SUBSCRIBE
Crossword Get access to over 6,000 interactive crosswords