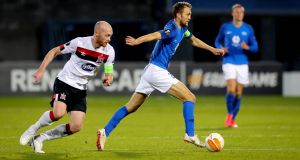 Clearly disappointed with his side’s defeat, Dundalk manager Filippo Giovagnoli said he has to shoulder at least some of the blame after failing to do more to freshen up a tiring side until after Molde had come from behind to lead the hosts 2-1 in Tallaght.

“The plan for the first half worked well, a high press in some situations, a defensive block in some other situations but we couldn’t stick to the plan in the second half.

“They were commanding the game by then, we lost control completely and they pushed us back into the final third which is something we didn’t want. We wanted to defend in the middle third. But we lost a little bit of energy and I can’t blame the players for that because they are playing every three days.

“So maybe an earlier intervention would have been better for us, I could have done something but I didn’t. But Molde are a good side too, even if we had done everything well we might have lost because they were strong, with very good players like the captain [Magnus Eikrem], their number seven, who was amazing.”

Giovagnoli must pick his players up quickly ahead of what is still an important league game in Waterford, which he insists will be his absolute priority until it has been played. Beyond that, though, he admits that he and his players will have to learn from this defeat as they look to adapt to life back in the Europa League.

“We had many positive things in the first half because we were able to do what we prepared and many good individual performances from the players.

“But we have to learn and learn fast. We cannot give the opponent complete control of the game like we did in the second half tonight. If you do, they are going to create opportunities and if they create opportunities in Europe then they are going to score. Tonight they didn’t get many chances on our goal but what we have seen is that they don’t need many at this level because of the quality of the player.”