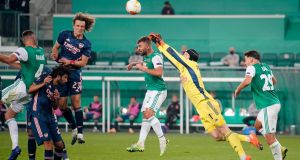 In the spirit of togetherness, Arsenal might agree Mesut Özil was half right. The exiled playmaker had warmed to his armchair status, and offered an open show of the loyalty he feels has not been afforded him, in predicting his teammates would win 4-1. They never looked like running up a comparable score but did, eventually, have too much for a competent Rapid Vienna side.

When Pierre-Emerick Aubameyang and Héctor Béllerin were hauled from the bench just after the hour, Arsenal were deservedly behind to a Taxiarchis Fountas goal that Bernd Leno will not want to see again. They levelled swiftly through David Luiz and then the substitutes combined smartly for Aubameyang to score and get the starting XI out of a hole.

The exhortations of 3,000 local supporters, whose noise befitted a far greater number, added edge to a first half that took a while to heat up. Their presence felt genuinely heartening; there were howls of protest when Cédric Soares fouled the lively Fountas in the fifth minute and dutiful boos when Srdan Grahovac received a nailed-on yellow card for scything down Nicolas Pépé in full flight. Vociferous approval followed when Alexandre Lacazette, feeling hard done by after being pulled up for halting a rapid break, was booked for his show of discontent.

If that whiff of atmosphere felt like a reminder of old times then so did Arsenal’s problems, generously underestimated by Özil, in breaking opponents down. They barely created a chance in the opening period beyond a bouncing header from David Luiz, who met Soares’s free-kick beyond the far post on the quarter-hour, that Richard Strebinger pawed away. There was a smart early exchange between Eddie Nketiah and Bukayo Saka, who could not quite tame his team-mate’s return pass as he sliced through on the left, but Arsenal maintained their recent tendency to be sturdy as opposed to spectacular.

That they felt stable at all, by the time the interval arrived, owed something to Thomas Partey. On his first start the midfielder smelled danger and tracked back beyond his defenders, performing exactly the kind of task he was bought expensively to do, to take the ball off Fountas’s toe as the home striker looked to run through. Partey exuded presence and composure throughout; he had a degree of success with diagonal switches out wide too, even if one had a little too much juice to allow Pépé a run into the box.

Fountas’s glimmer was not the only opening Rapid found. They picked their moments to commit men forward and came closest in the 19th minute when Marcel Ritzmaier, the striker on loan from Barnsley, tried to score with a back flick after a sweeping move and saw Bernd Leno save as the ball looped up. Ercan Kara, a giant forward with a fair touch, spun smartly just before the break but fired across goal and Arsenal were, familiarly, struggling to muster a sustained threat of their own.

The warning signs were there and a sloppy opening to the second half received its just deserts. In the first five minutes after half-time they were fortunate when the card-happy referee, Pavel Kralovec, missed a stray elbow from an already-booked Nketiah on Filip Stojkovic, and again when the ball ran down Saka’s arm in the box with no VAR to intervene.

In the sixth, they conceded calamitously. Managers tend to forgive goals conceded through high-risk passing from the back and Arsenal have, of course, lit up bigger occasions than this with goalline-to-goalline moves under Arteta’s tenure. But it was still not a good look for Leno, receiving the ball from David Luiz under pressure, to execute a sloppy pass out that Kara anticipated. Kara’s touch diverted it to Fountsas and the prolific Greece international supplied a clinical angled finish. Before anyone could mutter “Emiliano Martinez”, Leno had scuffed another kick out to Fountas and managed by atone by turning his low effort wide.

The hour mark passed; Arteta had seen enough to introduce Aubameyang and Bellerín, and the accompanying increase in tempo was critical. David Luiz’s equaliser followed some intense pressure and owed both to a fine leap to meet Pépé’s free-kick and a rash decision from Strebinger to challenge. The ball flew into the empty net and Leno was lucky, immediately afterwards, that a third blooper did not meet similar punishment when Fountsas lofted over.

No one could fault the execution of the winner, which quickly arrived when Bellerín ran onto a perfect slide-rule pass from Mohamed Elneny and offered Aubameyang a tap-in. In London, Özil maintained his fanatical show of social media support. – Guardian