Young Irish players need to look beyond England to the continent 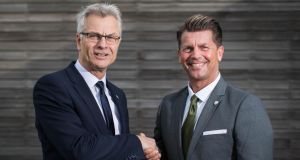 High Performance Director Ruud Dokter with Republic of Ireland Women’s manager Colin Bell. “The benchmark tells me that we are on the right track.” “Success will come,” says Dokter. Photograph: Ryan Byrne/Inpho

FAI high performance director, Ruud Dokter, believes young Irish players need to look beyond England and target continental leagues where there are greater opportunities to break into first teams if more are to successfully develop their careers.

Just seven players eligible to play for the Republic of Ireland featured in the Premier League over the weekend. Three of those came on from the bench while one of the starters, Declan Rice, is currently weighing up a switch to England.

Dokter suggests that the careers of other young Irish prospects have suffered because of the limited opportunities to play at what are, for the most part, the world’s richest clubs, and that those leaving Ireland should be looking further afield in order to play more regularly at what is, he says, a critical time in their development.

“When a player goes over to England you wonder whether he has made the right decision to go to the right club,” says the 63 -year-old, who was previously a member of the Dutch federation’s youth development set-up.

“It is very difficult for the English players to make the breakthrough in that system, never mind the foreign players.

“So England shouldn’t be the only option. I would strongly encourage players to go somewhere else, to go to leagues in countries like Belgium, Denmark, the Netherlands . . . and I am sure that if you are a good player you would be in the first team.”

He cites the example of Jack Byrne, the Dublin-born midfielder long regarded as the Irish game’s next big thing when he was coming through the youth ranks at Manchester City. The Premier League champions sent him on loan to the Netherlands where he did exceptionally well, only to struggle to maintain his progress after he returned to England.

Still just 22, Byrne is now at Kilmarnock where he was a second-half substitute in the game against Dundee at the weekend. He left City last year after having also had a loan spell at Blackburn and subsequently had brief stints at Wigan and Oldham.

If you jump in at the highest level immediately, it’s pretty sure that you are not going to make it

“Jack Byrne played at Cambuur,” says Dokter. “He took a while to adjust. Then he had an injury. Then he started to play well. He was in the news and then he was gone. I thought he should have stayed because he would have developed himself in a better way than within the loan system.

“So I would strongly encourage players to go to European leagues; I could mention a few names and if they went to these leagues I’ve just mentioned, they could be in the first team at the age of 18 or 19 and have a very good development. Then make the next step when you are 21 or 22, more mature, have some experience at a level.

“If you jump in at the highest level immediately, it’s pretty sure that you are not going to make it and if you don’t make it then you are going to have to make different moves. That’s very difficult.”

Dokter’s key role is to oversee the FAI’s emerging talent programme which, he insists, will ultimately produce significant numbers of players capable of playing in the senior international team.

He is reluctant to put a time frame on when the benefits of the work being done will be seen, however, suggesting only that it is a “long term” project and pointing to the fact that in celebrated cases like those of the Germans and Belgians, it took a decade or more for real improvement to be seen at senior level.

“It takes a long time,” he says, “that is inevitable. There’s no quick fix. What you can see with our national leagues and underage teams . . . There are now 13 in Tom Mohan’s group (the U-19s), homegrown. Colin O’Brien’s group (the under-17s), I believe there’s only one player from the UK. That’s a sign of opportunities and development of the players in our country.

All but three of the players O’Brien brought to the European Championships during the summer were, in fact, signed to British clubs by then; eight of them in the Premier League, and so many may well encounter just the sorts of problems Dokter warns about.

The hope is that clubs here can provide an alternative path to high level professional careers but the gap between the U-19 and senior teams at clubs here is seen as a major stumbling block to the progression of many underage prospects.

Quite a few within the club game here believe that an U-21 league, or something similar, should have been prioritised ahead of the national U-13 league that the FAI us currently recruiting for ahead of a scheduled March start. Dokter believes the route being taken is the right one but accepts that an expansion of the options available to players at the end of their teens would be a positive development too.

He confirms that the association is weighing up what would be the best way to approach the problem and, despite Shamrock Rovers’s abandonment of its B team a few years ago, suggests an expanded first division that would include a number of second team from the bigger clubs.

“Portugal has that model,” he says. “A few clubs have a second team in their second division and it works very well, I understand. Of course there is a cost factor but ultimately you want to develop players and it is an industry to you have to be smart in how you retain players, how you keep your best players and give them opportunities.”

Cost, inevitably, is a factor across the entire programme and Dokter acknowledges that in an ideal world there would be leagues at U-14, 16 and 18 levels too. Still, he insists, the money being spent is enough to produce the desired results.

“The resources that they have put into this in France are unbelievable but bigger counties have these resources. I have also seen countries that are smaller and very creative and with less money who have developed players as well.

“So we have to be creative and given the population that we have, I think that we do a good job and that the future is bright for us by putting the right structures in place. The benchmark tells me that we are on the right track.”