Lure of Real Madrid remains a big draw for Hazard 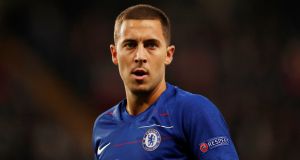 Eden Hazard: “It is a hard decision. It is my future. I am 27 and I will turn 28 in January.” Photograph: Andrew Boyers/Reuters

Eden Hazard has cast fresh doubt over his future after revealing that he is torn between signing a new contract at Chelsea and pursuing his dream of playing for Real Madrid.

The Belgian forward, who has less than two years left on his deal, admitted he did not know where his heart would lead him. Although he reiterated his desire to play for Madrid at some stage, it is not a given that he will push for a transfer next summer.

Hazard has made it clear he is happy at Chelsea, who hope to secure him on new terms worth around £300,000 a week, and he is determined not to go down the same path as his international team-mate Thibaut Courtois, who fell out with the Stamford Bridge hierarchy before moving to Madrid two months ago.

Hazard, who scored his eighth goal of the season in Chelsea’s 3-0 victory over Southampton on Sunday, agreed that he probably had one big move left.

“That’s why I spoke after the World Cup and I said that I think it is time to change because I played a great World Cup,” he said.

“I am really in the game, I am playing good football at the moment. Real Madrid is the best club in the world. I don’t want to lie today. It is my dream since I was a kid. I was dreaming about this club. We will see. I don’t want to talk about this every day. I don’t have time but we will talk about my future soon. I think so.”

Chelsea, who are level on points with Liverpool and Manchester City at the top of the Premier League, are desperate not to lose Hazard. He has helped them win two league titles, the FA Cup, the League Cup and the Europa League since joining from Lille six years ago and he is thriving under Maurizio Sarri, who replaced Antonio Conte as manager in July.

However Hazard found himself questioning Chelsea’s ambition after their failure to qualify for this season’s Champions League and he admitted that Madrid, who had just sold Cristiano Ronaldo to Juventus, were his preferred destination after helping Belgium finish third at the World Cup. He has not been put off by the Bernabéu club’s poor form under Julen Lopetegui, who is under pressure after four games without a win.

“It is also when you have a dream and you want to make it happen,” Hazard said. “It is like I have said a lot of times: if I leave I will be happy; I know if I stay I will be happy. It is not like if I go I am happy and if I stay that I am unhappy.”

Reports in Spain have suggested that Paris Saint-Germain’s Neymar remains Madrid’s favoured choice to replace Ronaldo, which could force Hazard to change his stance. Although he opted not to open negotiations over a new deal last season, he will resume formal talks when Chelsea are ready.

“I could talk now,” he said. “If they come to me, then I will talk. I don’t want to say that I am not talking with the club or the owner. I am talking a lot with them.”

For all his admiration of Madrid, Hazard hinted that Chelsea might not have to do much to convince him to stay.

“I am happy and I don’t need anything,” he said. “It is not trophies. Of course, when you play, you want to win but I just want to enjoy things on the pitch, like I am at the moment. Then I am happy.”