Depleted Celtic still too strong for Hibs at Parkhead 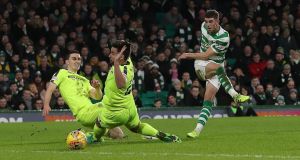 Celtic showed their strength in depth with a routine 2-0 win over Hibernian in their Scottish Premiership clash at Parkhead.

Boss Brendan Rodgers had a team of players unavailable, mostly through injuries, which had left his squad stretched but they were still too strong for the visitors and led at the interval by midfielder Ryan Christie’s 24th-minute drive.

Striker Oliver Burke, on loan from West Brom, doubled the home side’s lead in the 64th minute with a deflected shot for what, in the end, was a solid more than sparkling win.

Rangers’ 4-2 win at Aberdeen means leaders Celtic maintain their six-point lead over their Old Firm rivals as they continue an impressive run of form, having won all six matches since the turn of the year without conceding a goal.

Hibs’ caretaker manager Eddie May now has two defeats and one victory on his record since stepping in for departed head coach Neil Lennon and the Easter Road club continue their quest for a replacement ahead of the Scottish Cup game against Raith at the weekend, where they will hope to get their focus back.

New signing Jeremy Toljan made his first start at right back, Timothy Weah came in for injured winger James Forrest while another of Celtic’s January recruits, 22-year-old Ivory Coast forward Vakoun Bayo, was on the bench.

The visitors, who had Ryan Gauld and Sean Mackie back in the side, showed some early intent but Celtic’s pressure began to slowly build and in the 14th minute Christie came close with a range-finding drive from the edge of the box.

Hibs goalkeeper Ofir Marciano then had to be quick off his line to block a close-range effort from Weah, who had latched on to a pass from midfielder Callum McGregor.

The impending opener came when Christie took a pass from Toljan inside the penalty area and quickly fired a right-footed drive low past Marciano for his third goal in four games.

Hibs became increasingly ragged and Marciano parried another Weah shot, this time from 20 yards, as the home side threatened once more.

Mark McNulty replaced injured Oli Shaw for the start of the second half and then Stephen Mallan took over from Gauld just before the hour mark, seconds before Marciano made a remarkable save from Boyata’s close-range header from a whipped-in Christie free-kick.

However, the second goal arrived soon afterwards. Burke raced into the box to take a clever Christie pass with his drive hitting Hibs defender Darren McGregor and looping over Marciano.

Immediately, Darnell Johnson came on for David Gray to make his Hibs debut and moments later McNulty flashed a drive over the Celtic bar but a comeback looked unlikely.

Rodgers turned to his bench with Mikey Johnston replacing Scott Sinclair while Boyata made way for Nir Bitton.

Bayo was ready to make his debut but as he stood on the sidelines, left-back Emilio Izaguirre was crocked by a fierce tackle by Johnson, who was booked by referee Craig Thomson.

Jonny Hayes came on for the Honduras international who was carried up tunnel on a stretcher, the one sour note of Celtic’s evening.