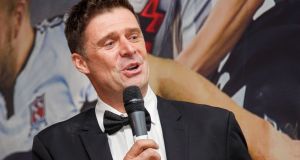 Niall Quinn hopes to implement a plan to recolutionise the League of Ireland. Photo: Tommy Dickson/Inpho

Former Republic of Ireland international Niall Quinn has said that he hopes to be able to provide considerably more detail on his proposals for the League of Ireland, and the people backing them, in the coming weeks.

“I’m going to try and upgrade this conversation in a month or so,” said the 52-year-old after a well attended public meeting organised by Labour Party senator, Aodhán Ó Ríordáin, in Dublin on Monday night.

“These guys have given up time and have got people in the companies they own giving time over to help with all of this. Understanding what needs to happen is one thing; understanding how much it’s going to cost is another and that’s not my field.

“Hopefully I’ll have about a dozen people at the next meeting and I can let them speak for themselves from then on and then I would step away a little bit because my job is to keep the debate going and then it gets into the serious nuts and bolts.”

Quinn said that the meetings which have taken place since he spoke about the project in early January have gone well with politicians, he suggested, open to being persuaded regarding the substantially increased funding required if a strong case can be made for it. That, he is said, is a key part of what is being worked on at the moment.

He has yet to sit down with with anyone at the FAI for formal talks but said there was an informal understanding that both sides would meet “when the time is right”.

The former Arsenal, Manchester City and Sunderland striker has suggested that the scheme might attract support from the business community with the help of tax breaks but the idea was also raised at the meeting that part of the two per cent tax on betting, which currently goes to the Greyhound and Racing Fund might be allocated to football.