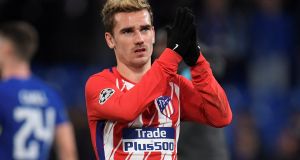 Atletico Madrid’s Antoine Griezmann can leave the club if the right opportunity comes along, according to manager Diego Simeone. Photo: Toby Melville/Reuters

Antoine Griezmann will be allowed to leave Atletico Madrid if the right opportunity comes along for the France forward, according to coach Diego Simeone.

Simeone said he would not stand in the way of any of his players if they wanted to leave to develop their careers, and that could open the door for 26-year-old Griezmann — who has reportedly been on the radar of clubs including Manchester United, Barcelona and Paris St Germain — to leave either in January or next summer.

“Of course he can leave at some point, like Diego Costa and Arda Turan did in their day,” Simeone told L’Equipe.

“I love watching my players grow, and if one of them tells me that they have the unique opportunity of playing for a certain team, after they did everything they could for me, like Griezmann has done, I’ll say it’s not a problem.

“I know that he needs to grow.”

Griezmann, who won the Golden Boot at Euro 2016, is under contract with Los Rojiblancos until 2022.