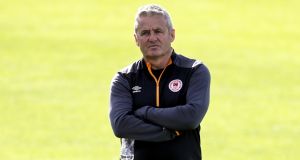 Harry Kenny: “We’ll be looking to throw people forward, trying to get the first goal and then take it from there.” Photograph: Laszlo Geczp/Inpho

Harry Kenny has an unchanged squad to choose from as St Patrick’s Athletic try to overcome a two goal deficit from last week’s home leg against Swedish side Norrköping on Thursday evening (kick-off 7pm Irish time).

The Dubliners worked hard to stay on terms with the Swedes at Richmond Park but ultimately came up short as defensive errors effectively handed their opponents a major advantage with 90 minutes to play. But Kenny remains hopeful that his side might yet save itself.

“It’s a tough ask, but there is no point in being in the tie if you are not going to go for it so we’ll get our plans done,” says the manager.

“I thought we acquitted ourselves quite well in the first leg, but just gave away two sloppy goals.”

This time, he continues, “we have got to find areas of the pitch where we can hurt them. We certainly won’t be going gung-ho from the start of the game but we’ll be looking to throw people forward, trying to get the first goal and then take it from there.

“It has to be said they are a very good team with some really good players and lots of internationals but we’ve just got to try and get through the tie.”

Longford claim first O’Byrne Cup since 2000 16:43
Leinster qualify as top seeds with Benetton win 15:50
Tottenham draw a blank as Watford’s revival continues 14:55
Leeds’ promotion hopes take another hit at QPR 14:51
Lee Westwood rolls back the years to lead by one in Abu Dhabi 14:47