Paco Alcacer takes his chance with double in Barcelona win 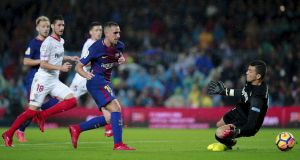 Paco Alcacer was Barcelona’s match-winner as his brace helped the LaLiga leaders make it 10 victories from 11 games with a 2-1 success over Sevilla.

The recalled Alcacer, who endured a disappointing first season at the Nou Camp, was making just his second league start of the campaign, yet he made an impact by putting the hosts ahead midway through the first half.

And after Guido Pizarro had levelled for Sevilla after the break with a header from a corner, it was another first-time finish from Alcacer that restored Barca’s lead, and their four-point advantage at the top of the table.

Having failed to score in a Champions League match for the first time in five years at Olympiacos in midweek, Barcelona looked keen to find the net early.

Lionel Messi’s first wander through Sevilla’s defence forced a save out of David Soria, who then came out to claim Luis Suarez’s attempted lob before Sergio Busquets’s shot was cleared off the line.

Samuel Umtiti was nearly caught out at the other end when giving away possession to Luis Muriel, who could only fire wide, but it was otherwise largely one-way traffic.

Alcacer had not started a league game since the opening day of the season, but was handed a rare opportunity by Ernesto Valverde and in the 23rd minute he took it.

Suarez’s long diagonal pass was not dealt with by Sergio Escudero and Alcacer was on hand to pounce with a first-time slid finish past Soria.

It was the type of predatory play that Barca had been missing for weeks, and he almost struck again before the break with an attempted flick from Ivan Rakitic’s cross.

Sevilla finally showed up after the interval as Muriel fired over and Nelson Semedo stepped in to thwart Pablo Sarabia.

There was no stopping Pizarro in the 59th minute, though, as he attacked an Ever Banega corner ahead of Pique and directed a terrific downward header into the far corner.

Pique looked to atone for that by breaking out of defence and unleashing an effort from distance onto the top of the crossbar.

And it was the previously unfancied Alcacer who once again struck to restore Barca’s lead six minutes after the equaliser.

When Rakitic popped up in space on the right, the striker was directing where he wanted the Croat to send the cross and when he duly obliged, Alcacer beat his marker and goalkeeper Soria to prod home.

It was his ninth goal in his previous nine starts for Barcelona, not that his time on the pitch would last much longer.

At that point Valverde was considering two changes, Gerard Deulofeu and Denis Suarez, but he brought on just the former, surprisingly for the two-goal Alcacer.

A nervy finish could have been avoided if the impressive Rakitic had won a penalty when Escudero clearly trod on his foot, but Sevilla could muster little in the dying stages anyway.