Morata denies he is unhappy with life at Chelsea 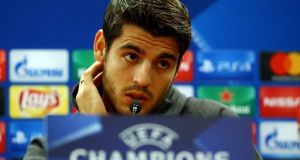 Álvaro Morata: “We had a problem of understanding in this interview.” Photograph: Alessandro Bianchi/Reuters

Álvaro Morata has reaffirmed his commitment to Chelsea and insisted he is happy at the club after appearing to suggest in an interview with La Gazzetta dello Sport that he pines for Italy and finds life in London has “too much stress”.

The Spain international, who spent two seasons at Juventus, signed a five-year contract at Stamford Bridge only in the summer after joining for a club record initial fee of £58 million from Real Madrid. Indeed, having hinted at being unsettled over the weekend, his attempts to demonstrate a desire to make a success of life at Chelsea saw the forward end his pre-match press conference at the Olympic Stadium, where his team take on Roma tonight, by claiming he would be willing to sign longer terms at the club.

The striker scored seven goals in his first seven games for Antonio Conte’s side only for a thigh injury, sustained against Manchester City, to disrupt his rhythm. His last goal came in the win at Atlético Madrid more than a month ago.

“I want to say again that we had a problem of understanding in this interview,” said Morata, who was born in Madrid and has had two spells at Real. “If Chelsea proposed me 10 years I’d probably sign that too. I’m happy with this club, in this city, with everything in London. I really like London and, probably, if I make good and improve, probably I can stay here more than five years. But I need to score many goals, otherwise Chelsea will buy another player. It’s normal.

“We have a communication problem with this interview. I wanted to say, probably in the future when I finish in my career, I won’t live in London. But now, at the moment, I’m very happy in London and enjoy living in London with my wife. In the future, when I need to bring my child to school, or when I finish my career, I’d prefer to come back to my country. It’s normal. I prefer the place I was born. But now I’m very happy.

“When I say it’s a stressful city, I’m only talking about the traffic and that there are a lot of people there. But it’s an incredible city with many religions and many kinds of different people, so I really enjoy London.”

Morata had conducted the interview with Gazzetta after the match at Bournemouth, where Chelsea won 1-0 on Saturday. When asked about life in England, he had suggested he did not see himself “living in London for very long”. The forward has settled in Chelsea, in the same apartment block where Conte lived last season, but has found the capital “too big, too much stress, too much of a metropolis”. That seemed to imply he would soon be joining his team-mates and head coach in Surrey near the side’s training base in Cobham rather than being unsettled in the Premier League.

Perhaps more concerning for the club – particularly in the wake of Diego Costa’s constant pining for Madrid – was the warmth in which Morata still clearly holds Italy. The forward spoke fondly of his time at Juve, where he was signed by Conte in the summer of 2014. He is married to an Italian.

“The disappointment [of leaving Juve] was enormous, and I found myself back to the starting point,” he told Gazzetta. “Real treated me like the guy I was before the two seasons in Italy. Italy, for a Spaniard, is the best country to live.

“You have everything: beauty, history, art, cooking, fashion. I would never have left Italy and Juve. My wife would like to live in Spain, I in Italy. Here too, we can find a compromise.”

Morata has failed to score in five appearances against Roma and will attempt to break his duck as Chelsea seek the win to smooth progress into the knockout phase. Yet they may have to do so without N’Golo Kanté, who will be assessed by the club’s medical staff today. The France midfielder has trained three times since hurting a hamstring during a World Cup qualifying win in Bulgaria this month, with Conte due to speak with him on match day to determine whether he is confident enough to feature.

The champions confront Manchester United on Sunday, and it seems likely Kanté will be spared full involvement in Rome with that match in mind.

The French man was badly missed in the first fixture against Roma, when the Italians trailed 2-0, led 3-2, and then shipped a late equaliser to Eden Hazard. Like Chelsea, they have won their three subsequent domestic fixtures and hope to have Kostas Manolas, another player courted by the Premier League club in the recent past, fit and available after he resumed training following a thigh complaint.

“We respect Chelsea, but we’re also convinced about what we can do,” said the manager, Eusebio di Francesco. “We’re growing and the great strength of this team is that we give away very little. We didn’t go for broke in London – we played with our own identity. That match must be a starting point for us.”