Leeds prove they are dangerous and demand respect

There must be defensive concerns for Marcelo Bielsa despite exciting start 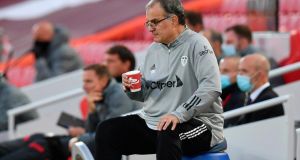 On his first day in his new prison, Marcelo Bielsa walked into the yard and, following the time-honoured precedent, approached the biggest fellow convict he could find, and smashed him in the mouth. He may have lost the fight that ensued, but he landed sufficient blows for the wider point to be made. El Loco hasn’t changed. There will be no tempering of the approach – not that anybody should ever have thought there would be. Leeds are dangerous and demand respect.

Or at least that was how it felt during Liverpool’s breathless 4-3 win at Anfield on Saturday. The spectacle, the assault on the sense, the feeling of things happening, constantly, everywhere, was overwhelming. The former Boca Juniors centre-back Juan Simón once described the experience of playing against a Bielsa side as like being run over by a tractor; so, frankly, is watching them, particularly against another team as determined to press and attack as Jürgen Klopp’s Liverpool.

In the more thoughtful corners of the Argentinian Football Association, there are concerns that the Bielsificación of the domestic game has. ultimately been detrimental, that it has prioritised speed over everything else and that with a lower level of player it results in football that is nothing more than kick and rush, a little bit – and the disgust with which the phrase was uttered probably had to be seen to full be appreciated – “1980s English lower leagues”. To which the obvious retort is to point to games such as Saturday’s and revel in what furious pressing can look like with better players.

But, still, as the initial thrill passes, there must be concerns. Leeds in the end may have lost only to an 88th-minute penalty, but Liverpool had 22 shots to their six. Most xG models had Liverpool winning by around about 3.25 to 0.25. Leeds scored with all three of their shots on target, and none of them were exactly clear chances. There will be many weeks when they are not so clinical in front of goal. Patrick Bamford is not Gabriel Batistuta.

Bielsa was clear-sighted about that, criticising both how few chances Leeds created despite shading possession, and the chances they ceded. Virgil van Dijk’s header was the result of a basic failure of marking at a set piece. The award of the first penalty may have been mystifying, given how the ball cannoned off Robin Koch’s thigh on to his arm, but the second was the result of a reckless and needless lunge by Rodrigo.

That they were able to block 13 shots, more than double the total achieved by Liverpool and the four Premier League sides who had played earlier in the day put together, is from one point of view highly impressive, speaking both of dedication and of how they got men in positions to close down opponents. But on the other hand, it meant there were moments when the dynamic of the game was a little like a cup tie, a minnow gamely throwing everything on the line – and that is not sustainable in the long term.

It may be, in fact, that Rodrigo’s late foul was conditioned by the frenzied nature of Leeds’s defending, a newcomer desperate to exhibit the same commitment as his teammates.

Maybe that doesn’t matter. Liverpool, after all, are not Leeds’s rivals this season. And this was a world away from the opening game of last season, when Liverpool were mildly unconvincing against another newly promoted team in Norwich and yet were still 4-0 up by half-time. There may again have been a gulf in class, but it was nowhere near so stark.

The 4-3 scoreline recalled Leeds’s victory over Liverpool in the Community Shield in 1992, a game that with hindsight seems to denote the end of eras for both clubs. Eric Cantona scored a hat-trick but was gone within three months, while Liverpool were in their Graeme Souness era decline. This, though, felt a far more positive occasion for both teams.

Liverpool may worry about the three goals conceded, but they came through a test of a very different kind to anything they faced last season and were far more dominant than the scoreline suggests. Leeds, meanwhile, bloodied the noses of the champions. And for all that there must be caveats, for all it must be recognised that it was not as close as 4-3 with a late penalty-winner may suggest, they stood up to the team that last season was the best in the country, and there is heart to be drawn from that. This is not a promoted side cowed by the Premier League and this season should, at the very least, be fun. - Guardian