Chelsea edge it on penalties to set up all-London final

Chelsea Manager Maurizio Sarri has admitted that he couldn't watch the last two penalties in the shoot-out against Eintracht Frankfurt that won them a place in the final of the Europa League against fellow London side Arsenal. Video: Reuters 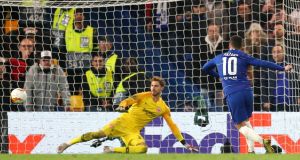 It had to be Eden Hazard. This had been billed as the Belgian’s final appearance in Chelsea blue in this arena before an anticipated summer move to Real Madrid after seven years in south-west London but, with his threat having largely been contained by Eintracht Frankfurt through two hours of toil, his moment would come in the shootout. His scriptwriter should take a bow.

Kepa Arrizabalaga, having watched César Azpilicueta denied earlier in the piece, had saved easily from Martin Hinteregger and splendidly from Gonçalo Paciência to set up the finale. Up strode Hazard to his mark to stroke in the spot-kick and send Chelsea to Baku, completing England’s monopoly of places in European finals this term. And to think the Germans might have claimed this tie in the extra half-hour, when the substitute Sébastien Haller had twice seen efforts scrambled from the goal-line by David Luiz and Davide Zappacosta. But Hazard simply would not be denied.

Sarri had been at pains in the build-up to insist this semi-final was far from decided, for all that an away goal at the Commerzbank Arena had so clearly shifted momentum in Chelsea’s favour. Frankfurt had appeared a team rather deflated in the latter stages of that contest, as if the tie might already be slipping through their grasp, with their hangover duly extending to a drubbing at Bayer Leverkusen over the weekend. They had shipped six goals in the opening 36 minutes at the BayArena, a capitulation indicative of mental as well as physical fatigue after a slog of a season. When they did eventually crack here, albeit after a promising opening, wild-eyed defenders trudged back into position to suggest panic may have set in.

It was Ruben Loftus-Cheek, Chelsea’s inspiration of the moment, who had forced the hosts ahead. The England midfielder is currently playing the best football of his career, stamping authority on contests with those trademark rampaging bursts through the centre. Frankfurt had been bullied by him in the first leg and still had no answer whenever the 23-year-old built up a head of steam. He had set the tone early on, parting Frankfurt’s midfield with ease only for a heavy touch to let him down. Danny da Costa might have impeded him at the back post moments later as he threatened to reach Willian’s centre, though the Germans’ respite was always likely to be brief.

Just before the half-hour mark, Hazard twice spun away from a flustered David Abraham before sliding a pass inside Sebastian Rode for Loftus-Cheek to collect. He strolled unchallenged into the Frankfurt penalty area, opened up his body and finished crisply across Kevin Trapp and into the far corner. That was a 10th goal of the season. Those regular back twinges may remain a concern, and a threat to smooth progress, but this is a player around whom Chelsea should be planning the future.

Frankfurt had rather wheezed through that frenetic period. Makoto Hasebe did well to scramble David Luiz’s flicked header from the goal-line and Olivier Giroud’s close-range shot would rebound off Trapp’s chest, with visiting players visibly rattled by the ferocity of it all. They had craved the interval and a chance to regroup in the hope they might replicate their original urgency upon the resumption. Back when the game had been goalless it had taken a sharp save from Arrizabalaga to deny Da Costa on the volley after Luka Jovic, a player coveted by Europe’s elite, had barged David Luiz off the ball and crossed.

It was to Jovic and Ante Rebic, restored after suspension, whom Frankfurt looked for a revival. The latter might have earned his team a penalty early in the second half after striking Mateo Kovacic’s hand with a clipped pass infield, though it mattered not. Chelsea were still frazzled, their composure suddenly wrecked in an all too familiar slack restart, when Jovic chested a pass back to Gacinovic and accepted the return, slid calmly into space behind David Luiz. The Serb sprinted between the centre-backs and fooled Arrizabalaga with a feint at a shot to the goalkeeper’s left before ramming in the equaliser to the Spaniard’s right.

That was the Serb’s 10th goal in the competition, drawing level with Giroud as the Europa League’s top scorer, with all semblance of control draining from Chelsea’s play in the process. The occasion had been transformed into a far more frantic duel as Sarri chuntered away in frustration on the sidelines, enraged as Gacinovic pummelled a volley from distance which Kepa pushed away with the ball ricocheting around too often on the edge of the home side’s box. The Italian had to be ushered back into his technical area by the fourth official as his exasperation mounted. This occasion had long since become horribly uncomfortable, with Loftus-Cheek’s substitution prompting a chorus of booed disbelief from the locals.