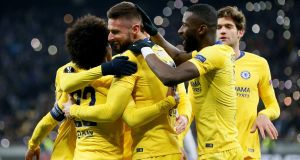 This ended up more like a bye into the Europe League quarter-finals than the perilous encounter Maurizio Sarri had rather warily foreseen. Chelsea barely broke into a sweat in dismissing a desperately naive Dynamo Kyiv, with the uneven playing surface probably representing more of a threat than overawed opponents.

The whole occasion lacked a competitive edge though, given his team’s toils at times in recent months, Sarri will have welcomed such a stroll. His side feel like contenders in a competition which carries the considerable prize of Champions League qualification. They have the leading scorer in Olivier Giroud, a World Cup winner who has harshly been reduced to mere bench-warmer status these days in the Premier League. A striker who has managed less than an hour of topflight football this year departed with a hat-trick, the match-ball and his goal tally in Europe swollen to nine in as many games.

There were other positives to be gleaned at the Olympic stadium. Callum Hudson-Odoi would contribute cutely to the third goal with a neatly worked assist, and would slide in a fourth of his own European campaign near the end, while Marcos Alonso revelled away from marauding Premier League right-wingers. The Spaniard scored, assisted and saw a free-kick tipped gloriously on to the angle of post and bar by the overworked Denys Boyko. This will have helped restore some confidence in the left-back.

Yet arguably most encouraging of all was the contribution of Ruben Loftus-Cheek. The 23-year-old had returned to Chelsea in July with his reputation enhanced by a successful loan spell at Crystal Palace, and the part he had played in propelling England to the World Cup semi-finals. Plenty since has been anticlimactic, his progress hampered by recurring back problems and the manager’s scepticism over his defensive capabilities. But, when he muscles his way in amongst opponents or glides forward with menace in possession, he supplies a new dimension to this team’s approach.

Loftus-Cheek is arguably fortunate to find himself retained in the England set-up for the Euro 2020 qualifiers against Czech Republic and Montenegro but, with yoga alleviating some of the muscular complaints, he has a major contribution to make in his club’s run-in. There will be far tougher occasions ahead than this, not least against Everton at Goodison Park on Sunday, but he adds considerably to Chelsea’s armoury.

Dynamo found him, like Chelsea, irresistible. Already trailing by three in the tie, the stuffing was knocked out of their endeavours by an early concession. It was hard to fathom how they could have lost only twice in 14 previous home games in European competition, so easily were they prised apart. They had dozed at Chelsea’s first corner, swung over into a cluttered penalty area by Willian for Loftus-Cheek to flick on, diverting the ball’s course to an unmarked Giroud at the far post. The Frenchman’s first plunder of the contest was a close-range tap in.

His night would yield a second European hat-trick, and Chelsea’s first away from home in continental competition since Didier Drogba at Levski Sofia in 2006. Loftus-Cheek would contribute in the buildup to his second, too, spinning away from Serhiy Sydorchuk before spreading the play to Alonso. His centre was wonderfully weighted and placed, bypassing the hosts’ rearguard for Giroud to dart between centre-halves and convert.

It was the first time Alonso had been directly involved in a goal, either scoring or assisting, since November, which summed up his personal slump in form, though he too would capitalise on Dynamo’s utter inability to contain Chelsea’s threat. In first half stoppage time, and with the home side apparently reluctant to shepherd clear a corner, Hudson-Odoi and Giroud exchanged passes with the winger permitted to scuttle unchecked to the byline. His pull-back across goal was prodded home by Alonso with ease.

This had long since degenerated into a mismatch. The tie would be 141 minutes old across the two legs before Dynamo, playing catch up to Shakhtar Donetsk in their domestic league, would manage even a shot to trouble Kepa Arrizabalaga and, although Sydorchuk would strike a post, their threat had long since withered away.

Giroud, rising unchecked, guided home a header from Willian’s free-kick to complete his treble long before the end. He looked almost sheepish in his celebration and was content thereafter to set up Hudson-Odoi for the youngster’s own reward, with Dynamo pleading for the final whistle. Eden Hazard had not been required to leave the bench in either game, and still Chelsea’s aggregate margin of victory extended to eight. It was no contest.