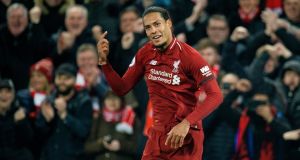 Virgil van Dijk believes Liverpool will want victory more than Everton in the Merseyside derby owing to the ramifications for the pursuit of the Premier League title.

Everton have not beaten Liverpool since October 2010 and a winless sequence of 16 derbies is the longest barren spell in the club’s history. The manner of Liverpool’s victory in the 96th minute of December’s derby also smarts for Marco Silva’s side, whose form plummeted afterwards.

However, none of those factors compare to the prize of landing Liverpool’s first league championship since 1990, according to Van Dijk, who insists the greater motivation at Goodison Park tomorrow will be among the players in red.

The Liverpool defender said: “I’ve played in the Old Firm derby, which is really intense. When I played Rangers were lower level-wise than they are now, so it was pretty easy back then.

“But this is the Premier League and it’s totally different. It will be a game that can go either way and sometimes in these type of games it is who wants it the most. We are in a position where we definitely want it the most and hopefully we can show it on the pitch.”

Van Dijk expects “a game full of passion”and says he will thrive on the knowledge that Everton, like Manchester United last weekend, are desperate to damage their rivals’ title challenge.

“I like that,” he said. “It is always something which motivates you even more and it is a great game to play in. It’s the derby and it’s special but we want to show our quality, win the game – hopefully with good football but if not we are going to fight for it.”

Jürgen Klopp is friends with a few Evertonians who, as a result, want Liverpool to win the Premier League rather than Manchester City. He refused to divulge names for safety reasons.

“I am not allowed to speak about it,” the Liverpool manager, who has won five and drawn two of his seven Merseyside derbies, said, jokingly. “In my normal life I meet quite a lot of Evertonians. They are all nice. I am not sure I am allowed to say that. I promised I would not say their names, because that could cause them problems and I don’t want that.

“Because they know me they think it is better for us [to win the league] than somebody else they don’t know. But it’s not okay to talk about that, because it could cause them real problems. I don’t want that.”

Klopp believes Liverpool’s dominance of the derby in recent years should inspire rather than intimidate Everton’s players tomorrow, when Goodison will host its 100th league meeting between the clubs.

“We were lucky in the last game, scored in the last second, and lucky when Sadio Mané scored the late winner at Goodison. It is never a normal game. It is always really special.

“It is really important we don’t take anything – not just in this game but in all games – for granted. Just work for it and the world is open.”

Meanwhile, Marco Silva has claimed Klopp celebrated Liverpool’s dramatic derby win in December like it was a World Cup final as he responded to his rival’s barb about the importance of Sunday’s fixture to Everton.

The Liverpool manager accepted a misconduct charge by the English Football Association for sprinting on to the pitch to celebrate Divock Origi’s 96th-minute winner at Anfield.

Last weekend, when looking ahead to the 200th league meeting between the Merseyside rivals, Klopp said: “We all know for them it’s like a World Cup final”.

That prompted a wry smile from the Everton manager, who was keen to remind his Anfield counterpart of behaviour that underlined the significance of the derby for Liverpool too.

“For us?” laughed Silva when told of Klopp’s comment.

“We were affected in that specific moment and it affected that result. We deserved more than we achieved but if you are talking to me about January, February, then no. It doesn’t make sense. We have to react.”