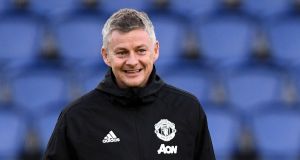 Ole Gunnar Solskjær: “We can do it – obviously we need the first goal and we need to stay in the game for half an hour left and one goal in it anything can happen.” Photograph: Franck Fife/AFP/Getty

Ole Gunnar Solskjær said overturning Paris Saint-Germain’s 2-0 advantage in the last 16 of the Champions League is not “mission impossible”, with the Manchester United manager pointing to how PSG held a 4-0 lead over Barcelona two years ago but were still knocked out.

On that occasion PSG lost 6-1 at Camp Nou at the same stage as United take on the French club tonight.

United will have to do what 106 teams have failed to achieve in the competition: progress after losing the first leg 2-0 at home.

Their task is made harder by being without 10 players who are injured, ill or suspended. Paul Pogba, who is banned after his sending-off in the first leg, is one notable absentee.

Solskjær said: “It’s never mission impossible – it’s more difficult but we’ve got to get the first goal and anything can happen. Goals always change games and if we get the first one we’ll be believing even more and they might then doubt themselves.

“We can do it – obviously we need the first goal and we need to stay in the game for half an hour left and one goal in it anything can happen. But we need a good plan and we need to perform on the night.”

He added: “Everyone knows we have done it [in the past] and results in Champions League in the last few years, I don’t want to call it strange, but last year Juventus lost 3-0 at home against Real Madrid and suddenly they were 3-0 up after 90 minutes against Madrid away.”

A late penalty denied Juve in extra time on that occasion.

Solskjær continued: “The year before that, PSG against Barcelona. We remember those results.”

Solskjaer also revealed he may no longer be under contract to Molde after it was thought he had been when taking over as temporary manager in mid-December.

“I’m not sure how it works. I think the contract is expired and that I’m now under contract with Manchester United. I think we need a new contract there [at Molde],” he said.

Thomas Tuchel, meanwhile, has warned Paris Saint-Germain they will have to be “200 per cent” to knock Manchester United out of the Champions League, the German stating Ole Gunner Solskjær’s side are imbued with the spirit that drove their interim-manager to be the hero of the club’s 1999 triumph.

PSG take a 2-0 advantage into the last-16 second leg at the Parc des Princes. Yet Tuchel is wary of Solskjær and cited his famous late winner as a substitute that beat Bayern Munich 2-1 in the final of 20 years ago.

“It’s better to always be aware of the qualities of Ole Gunnar Solskjær,” said the manager. “He was one of the key players of the biggest era of this club. He was always ready to help, in 30 minutes, 20 mins, 10 or five. This is the spirit of Manchester United, that they are ready for anything.

Asked how his side will approach the game, Tuchel said: “We need to forget the first result. Luck is also a factor, but we want to make sure there’s no luck involved. It’s important to reproduce what we did well, to find the right areas and forget the result, just concentrate on the actual performance.

“We’re going to play the same game, whether we won or drew the first match. I can’t let the players be influenced by that result. You have to be 200 per cent ready. The result will be what it will be, we just have to give our best.”

Solskajer stated United require the first goal to have a chance to overturn the deficit.

“For us too,” Tuchel said. “The first goal is really important, for us to show qualities and play together as a team. My team has been showing a very good level recently. Tomorrow the key is to be confident but not too confident, not be scared, trust in our skills and qualities as a team.

“We need to be ready in case Manchester score first. The game is going to be very tight, and we cannot waste our time thinking about every possible eventuality. We need to be ready to react to any type of scenario. The challenge is to play at our best.”

Tuchel may have Edinson Cavani back following a muscle injury.

“He was with us in the last couple of training sessions. We’ll decide tomorrow together whether he is going to be playing or not,” he said. “I know who’s going to play but I can’t say because we have training. The goalkeepers also know but you’ll have to wait.”