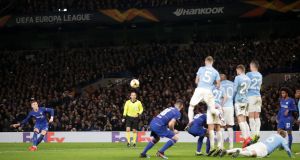 Maurizio Sarri limps on, his tenure surely extended, at least, to a Wembley cup final this weekend and that daunting collision with Manchester City. Chelsea may have left it late to impose themselves properly on Malmö and secure passage into the last 16 of the Europa League, but at present any kind of victory is to be celebrated by head coach and club alike.

There had been periods in both games when the Premier League side had felt stretched by Swedish opponents who are essentially still in pre-season, but there was always enough quality in Chelsea’s ranks to prevail. They ended grateful for Olivier Giroud’s eye for goal, the striker still prolific in this competition, and revelled in Callum Hudson-Odoi’s skill and pace. There was an irony that this game ended up feeling so comfortable courtesy of the youngster’s goal, fizzed across and under Johan Dahlin, given how hard he has found it to convince Sarri he deserves greater involvement.

The Italian, who had endured the locals’ frustration as their defence of the FA Cup petered out in disappointment earlier in the week, even escaped a barracking from the sidelines. He remains without his assistant, Gianfranco Zola, who has suffered complications after a gallstone problem, and cut a lonely figure on the sidelines. But Europe continues to provide some respite from domestic toils. Sunday’s engagement will be a different story.

This had been an anxious occasion from the outset. Sarri, agitated on the sidelines at the best of times, had forever fretted beyond the fringes of his technical area, jostling with the fourth official when he encroached too far, and sucking ever more deeply on the cigarette butt which is supposed to serve as a comforter. His mood had inevitably transmitted itself to his beleaguered players out on the turf. Even with changes from the first-choice line-up, theirs had been a display initially gripped by nerves. This whole club has felt on edge for some time.

Mateo Kovacic’s attempts at busy efficiency as he deputised for the much maligned Jorginho may have been admirable, but sloppiness in possession occasionally exposed the midfielder’s underlying lack of confidence. The Croatian’s early attempt at a cross-field pass, merely presenting the ball straight to Marcus Antonsson and granting Malmö a hint of a chance, set the tone and it would be almost half an hour before Willian’s step-over and burst to the byline served to remind Chelsea’s senior players of their qualities. Kovacic would grow more assured as the half progressed, but the hosts were never comfortable.

They had needed an early goal to settle them in to a more upbeat tempo but, other than Ross Barkley’s shots from distance and César Azpilicueta’s awkward close-range attempt saved by Dahlin, opportunities had been scarce. Their brightest spark had been Hudson-Odoi, finally granted a first start since the closure of the transfer window and his failed attempt to move to Bayern Munich, and a player who had appeared freer in spirit than the rest.

There had been neat touches, flurries of skill to dart away from his marker, and his scurry down the right flank just after the half hour actually had the Swedes panicked until Behrang Safari barged the winger to the floor. It is that forward propulsion, all skill and fearless energy, that Chelsea have been so lacking.

Sarri, of course, has been warier of the innocence of youth, presumably fearing ill-discipline might undermine the collective effort. He would have winced at a slack touch from the teenager which was seized upon by Markus Rosenberg, the striker turning Antonio Rüdiger too easily to eke out space on the edge of the penalty area before dragging his shot wastefully wide of the post.

There had been other reminders of Malmö’s threat by then, from Lasse Nielsen’s header to Arnór Ingvi Traustason’s shot wide of Willy Caballero’s post. The midfielder had only flown in from Copenhagen on the day of the game, his wife having given birth to their daughter, but he had offered nuisance value aplenty.

The Swedes, with only two competitive games under their belt since December, would have been content to have carved out so much, but given that they were chasing the tie they needed to be even more expansive as the contest staggered on.

In that context, they had always risked being caught on the counter, with Chelsea eventually finding their range. The opener stemmed from N’Golo Kanté’s anticipation, bursting forward from the halfway line to intercept Nielsen’s stray header. The France midfielder would not be caught as he charged forward through the centre, with Malmö’s rearguard suddenly ragged, before feeding the overlapping Willian down the left. The Brazilian’s cross was pinpoint for Giroud to prod home his sixth goal in seven Europa League matches this term.

That deflated the visitors, whose own deficiencies, both in terms of quality and basic fitness, had finally been exposed. Nielsen, his display increasingly frazzled, checked Emerson Palmieri’s burst and was dismissed with a second flash of yellow. Barkley arced the resultant free-kick beyond Dahlin and into the net, and Chelsea – and their head coach – could breathe again. – Guardian